Offred. Ofjoseph. June Osborne. She is the complex, confused protagonist of Hulu’s The Handmaid’s Tale. The series centers around June’s life as a Handmaid in Gilead, the post-war dystopian future after a hostile takeover of the United States. As a Handmaid, she serves Commander Waterford, a powerful man who she attempts to use to her advantage.

As season three comes to an end, fans need to know anything and everything about June. Here you can read up on the most important facts. Be warned: there may be spoilers!

10. Offred is played by Elisabeth Moss.

Elisabeth Moss was born on July 24, 1982 in Los Angeles, California. She originally dreamed of being a ballerina and studied at the School of American Ballet in New York City. In 1990, however, she got her first screen role in Lucky Chances, an NBC miniseries. While that was her first screen role, her breakout role was really in Mad Men, a series on AMC. She has won a Golden Globe for her role as Offred.

9. She is separated from both her husband and her daughter. 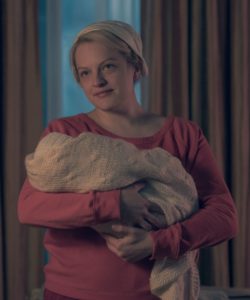 Before becoming Offred, she was June Osborne, a book editor working in publishing. She tried to flee Gilead to Canada with her husband, Luke, and her daughter, Hannah. While Luke escaped, the Guardians managed to catch June and Hannah. June was sent to the Red Center and trained to become a Handmaid. Hannah is separated from her and sent to live in the McKenzie household as their daughter. They call her Agnes.

8. Her biggest motivator is Hannah.

There are several times when she serves as Offred that June longs to give up. Life is incredibly difficult and she suffers constantly. However, Hannah gives June life. She bargains with the Waterford’s to have photos of Hannah and chances to see her. She gives up a chance to escape Gilead because she refuses to leave without Hannah. When she decides to try to get children out with the help of the Martha network, it is because of Hannah.

7. She is a Handmaid instead of an Econowife because Gilead considers her a sinner.

Econowives, like Eden, are the wives of poor men who are expected to fill the roles of Handmaid, Martha, and Wife. They tend to look down on Handmaids for giving away their children or for being lazy. June reflects that she could have had that life, staying with Luke and Hannah, if she hadn’t been an adulteress. June and Luke first got together while he was still married to his first wife.

6. She has multiple complicated relationships.

June still considers Luke her husband, even though Gilead voided their marriage. She always hopes that she will be able to make it to Canada and reunite with him. When a member of the Mexican delegation offers to get a message to him from her, she writes that she loves him. However, she enters into a relationship with Nick Blaine, Commander Waterford’s driver. Nichole is her and Nick’s baby. When he is promoted and has to leave, June makes it clear that she loves him, reciprocating his feelings.

5. She begins rebelling as a member of Mayday.

As Offred, June talks to the first Ofglen, Emily, about ways to fight against Gilead. Emily reveals that there is a resistance organization called Mayday. June decides to help them, especially after Emily is taken and sent to the colonies. She picks up a package of letters from Jezebel’s and with Rita and Nick’s help gets them to Canada. Alma, another Handmaid and operative, communicates with her until Mayday decides to stop helping Handmaids.

4. Offred convinces Serena that Nichole’s life would be better in Canada.

June and Serena are both horrified by Fred’s decision to have one of Serena’s fingers amputated as punishment for reading the Bible. Serena begins to question the sort of life a girl in Gilead could possibly have. June uses that confusion and convinces Serena that the best thing is to get Nichole out, which Rita and the other Martha’s help orchestrate. Serena is okay with the decision until she learns that June gave Nichole to Emily instead of going with her.

Angela, the Putnam baby that Janine calls Charlotte, falls ill, which makes Janine incredibly upset. June, feeling bad for Janine, convinces Serena that Janine deserves to see her daughter again, especially since Charlotte might be dying. At first Serena says no, calling it stupid, but she has a change of heart and convinces Naomi that it’s a good idea. Janine gets to see Charlotte, who miraculously recovers. Later, June preserves Janine’s feelings again, telling her that her son from before the takeover is in California instead of admitting that he’s dead.

2. June’s new goal is to get as many children as possible out of Gilead.

June, now Ofjoseph, struggles with the prolonged death of her walking partner, Ofmatthew. Knowing that Hannah has been moved somewhere far away and unknown, June commits herself to helping children escape Gilead. She bargains with Commander Lawrence for a truck and asks the Martha’s if they will help. She also enlists the help of Alma and Janine, who both have children living in Gilead.

1. June is still alive… but she might be in trouble.

The show’s hero is still alive, which is good news for us as fans. However, things are looking complicated. Commander Lawrence is under increasing suspicion, with Commanders Waterford and Wilson even going to his house to ensure the Ceremony happens. She wants to help over fifty children escape, but can’t even get a truck out of the district. And, to make matters worse, she murdered Commander Wilson at Jezebel’s when she was supposed to be looking for a job opportunity there. June’s found herself in a tricky situation.

Ten Things About Hannah Every Handmaid’s Tale Fan Should Know