Oh, Commander Waterford. He is perhaps one of the least popular characters in The Handmaid’s Tale. As the Commander the June is assigned to when the series begins, he is the man that the audience watches mistreat June, who he knows as Offred.

Fans watching the current season know that a lot is changing for the Waterford household and for Fred himself. Here you can read up on the major facts about Fred so that you can watch season three with ease. Keep in mind that this article contains information from season three, so there may be spoilers ahead if you aren’t caught up.

10. Fred is played by Joseph Fiennes.

Joseph Fiennes is a British actor born in Salisbury, Wiltshire, England on May 27, 1970. He comes from a family of artists: his mother was a writer, his father is a photographer, and four of his five siblings are also in the arts. Fans of the family will recognize his brother, Ralph Fiennes, as an actor famous for playing Voldemort in the Harry Potter series. Other than The Handmaid’s Tale, Joseph is well-known for his role as Shakespeare in Shakespeare in Love. 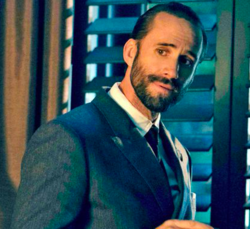 The Commander was an instrumental member in the creation of Gilead. He and Serena worked together at first to create a cultural environment conducive to the government takeover. However, after the terrorist attacks on the capital that he and his conspirators orchestrated, he agreed that Serena should be forced out of the conversation like every other woman and proceeded to design Gilead the way it exists in the show now.

8. He is portrayed as morally ambiguous.

There is a lot of confusion as to whether or not Fred can be considered a “good” guy. Often, the audience watches his acts of kindness. He allows June to play Scrabble with him in the evenings and takes her to Jezebel’s, particularly the second time when she asks to go. After the bombing in season two, Serena does his work for him. However, he continues to brutalize and use June, and when Serena reads the Bible, he supports her finger being cut off.

7. His actions with June are more than simply transactional.

June often says that she has to think of the Ceremony as a transaction, something she explains to Commander Lawrence in season three. Commander Waterford, however, doesn’t feel that way at all. When June comes into his office to play Scrabble, he sometimes asks her to kiss him. During one Ceremony, he looks at Offred instead of at Serena and he touches Offred’s thigh, both of which are forbidden. And, of course, he takes June to Jezebel’s so they can sleep together there.

6. Waterford grows to hate Nick and tries to punish him.

Nick Blaine is the Commander’s faithful driver—Fred doesn’t know that Nick is an Eye watching him—until he develops a relationship with June. Serena and June both tell Fred at points that the baby isn’t his, and he figures out that Nick is the father and that he and June have feelings for each other. Waterford asks Commander Pryce to find Nick a better job opportunity, and “rewards” Nick for his loyalty by giving him a child bride, Eden.

5. He craves a promotion more than almost anything.

Commander Waterford wants to move up in the world of Gilead, and he does whatever it takes to get ahead. He leads the construction of the new Rachel and Leah Center, where new Handmaids will be processed. Then, when baby Nichole is brought to Canada by Emily, he pleads for her safe return but uses the child as leverage to negotiate with Canada. The earlier visit of the Mexican delegation revealed that Gilead’s economy is struggling, so he needs Canada.

4. Commander Waterford is banned from Canada.

Fred and Serena visit Canada together for discussions between the two governments. Though he thinks he’s making progress, everything changes after Luke and Moira confront the Waterford’s. Nick recognizes Luke as June’s husband and gives him letters from oppressed women in Gilead. The letters are published online, and Canada orders Waterford and his wife out the next day, saying they are no longer welcome there because of the letters’ contents.

June’s daughter from before Gilead, Hannah, lives in the new nation and goes by the name Agnes. When he realizes how important Hannah is to June, Fred tries to help her. He gives her a polaroid photo of Agnes/Hannah, an act of kindness that contradicts Serena’s earlier taunting. Then, before baby Nichole is born, Commander Waterford grants June a ten-minute meeting with Hannah. When things go south and June is stranded at the house where she met with her daughter, Fred tells Serena the truth and she calls him stupid.

2. Fred orchestrates the attempts to get Nichole back to benefit his own career.

The Waterford household visits Washington to create propaganda videos to try to get Nichole back. They pretend to be a happy house, with June and Serena both standing with him. There is a scene of public prayer with Handmaids in the city, none of whom can speak to pray. He convinces the Swiss to stand in as intermediaries in negotiations with Canada and leads the talks. Commander Winslow tells Waterford that the whole thing is brilliant.

Fans of the series were ecstatic when watching season three, episode ten. Serena convinces Fred that they should meet with Tuello, an American representative, to get Nichole back without going through public negotiations any longer. Fred agrees to go along with it, and they both go to a meeting place in Gilead. When the two sides meet, Tuello tells them to follow him up ahead to a safe place to talk. After they finally stop, he reveals that they are on Canadian soil and the military arrives to arrest him in a moment of triumph.