Campaign 3 of Critical Role is off to a hot start. This campaign is full of a bunch of new faces and a few unexpected old friends. There are already numerous interesting characters coming to us every Thursday night, and one of them is a dead rat.

That’s right, our newest heartthrob in the Critterville is Pate de Rolo, the dead rat attached to Laudna’s belt. What’s the deal with him? We don’t know much yet, but keep reading to learn all about the dead rat of our heart: Pate de Rolo.

Who is Pate de Rolo? 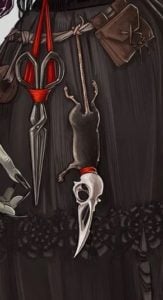 Pate de Rolo is the dead rat that hangs from Laudna’s belt. The rat is wearing a raven’s skull that Laudna claims died when it flew into the side of her home.

The best thing about Pate is that Laudna uses him as a marionette, even doing a ventriloquism bit as she speaks in a cartoonish, regal voice. it’s pretty great, or as Travis says: “The rat checks out.” Through Pate, Laudna mentions that talking with the rat keeps the voices in her head at bay.

But why is he named de Rolo?

Lauudna offered little explanation on why her dead rat took the last name of de Rolo, other than that she was from Whitestone and the name sounded fancy. This lead to a discussion with Orym about the de Rolo family, as Orym knows their story well. Laudna’s knowledge of the town seems to come to an end prior to the return of Whitestone to the hands of the de Rolo family.

We don’t know anything about Laudna’s background to this point, and there is no telling what kind of ties her character might have with the gang from Campaign 1. That said, you don’t think they’d drop a callback like this and never follow up on it, do you? We’ll have to wait and see!

What is a Hodmedod? | Exandria Unlimited Calamity