Rita has been part of the audience’s life since The Handmaid’s Tale started. As the Martha in the Waterford household at the same time as June’s assignment there, Rita is the backbone of life with Serena and Fred Waterford. She does the chores in the household—cooking, cleaning, caretaking. However, true fans of the show know that Rita’s role in the series is more complicated than that.

If season three has you confused about her relationships with June and Serena, look no further than this article. Here, we sort out the most important information about Rita, past and present, to guide you through the latest season. If you aren’t caught up, some of this might be spoilers.

10. Rita is played by Amanda Brugel.

Amanda Brugel, born Amanda Ellen Baker, is a Canadian actress born on March 24, 1978. Since 2008, she has been married to Marcel Lewis. Brugel is best known for The Handmaid’s Tale, then for Room and Eyewitness. In 2015, she won the Black Canadian Award for Best Actress. She will play Eugenia in the upcoming Snowpiercer television series, as well as continuing to play Rita. Brugel is also featured in Kim’s Convenience and Workin’ Moms.

9. Brugel believes she was destined for this role. 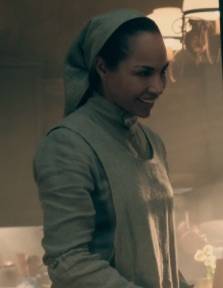 Not many actresses would believe that they are meant to play a character in the misogynistic dystopian Gilead, but Amanda Brugel has been waiting for this role her entire life. Brugel’s college entrance essay was about not just The Handmaid’s Tale, but about Rita specifically. She says she knew she would be cast in the role because there was no other possible outcome. Her love for Rita and dedication to the role shows in every scene.

8. She had a son before Gilead.

Rita and Serena have a conversation after Fred and June go to Jezebel’s together. Serena, frustrated, claims to be looking for chamomile tea before Rita offers to share a stronger drink with her. Rita is angry that Naomi Putnam complains about baby Angela, saying that she should appreciate every moment with her child. This is when Serena, and the audience, learn that Rita had a son, Matthew, who died in the war following the government takeover.

7. At first, Rita doesn’t want to get too close to June.

Some fans wonder why Rita is cold and curt with June when she is assigned to be Offred. She appears to be all business, without a soft side. However, in episode eight of season one, the fate of the former Offred is shown on-screen. Rita discovered the first Handmaid’s body after she committed suicide in her room. The death traumatized Rita, who had cared about the girl, and made her want to stay away from her replacement, June.

6. But eventually, she becomes the godmother of June’s baby.

Yes, you read that right. Gilead does not let Handmaids to baptize their babies themselves or designate godparents. However, when June prepares for the birth of Nichole, named Holly by June, she asks Rita to play the role of godmother. June wants people to protect her daughter after seeing how Fred treated Serena when she read from the Bible. Not only does Rita accept the role of protector, but she also promises to tell Nichole about June when she’s sent away.

5. Rita was much colder in the novel.

Fans of the Hulu series who read the novel first know that there are several differences between the two. In the novel, Rita and Cora are both Martha’s in the Waterford household. They get along well, spending time together and gossiping. However, Rita doesn’t warm up to Offred the way she does in the television series. She doesn’t approve of Handmaids and their status, thinking even the Colonies are preferable—which may surprise fans who know how terrible the colonies are! The series provides Rita with a more likable personality.

4. She saves June’s stash of letters.

Mayday, with Moira’s help, delivered letters to June written by women in Gilead, telling their stories and asking for help. June tucks them behind the bathtub, and when the Eyes come to take her away, she tells Rita to look for them there. Rita hangs onto them until after June’s failed escape attempt, keeping them safe from Commander Waterford and the Guardians.

3. Rita knows just about everything in the Waterford household…

Fans don’t always recognize just how significant the position of Martha is in any household. However, Rita understands her place in the home. She knows based on the shopping list whether or not June is pregnant and what mood the Waterford family is in. Rita knows about June and Nick’s relationship and the in-fighting between Serena and Fred. Since we don’t ever watch a day in Rita’s life, we can’t say for sure just how much she knows.

2. …which makes her a perfect member of the Martha network.

In one of the most empowering scenes of the entire series, a group of Martha’s works together to get June across their backyards and through fields with baby Nichole to where a truck will take them to Canada. Though June ultimately doesn’t get in that truck, the scene does introduce the audience to what actress Brugel refers to as the Underground Railroad and what others call the “Underground Femaleroad.” Season three reveals more of this network of Martha’s.

As of right now, Rita is still alive in the series. She hasn’t been punished for her role in helping smuggle baby Nichole out of Gilead and into Canada because it would get Serena in trouble as well. She stays with Serena after the house burns down, when she goes to live with her mother. Now that the Waterford’s have been caught in Canada, it isn’t clear what will happen next for Rita.