The audience of The Handmaid’s Tale loves not just June, but Nick. He is the male protagonist of the series, working with June in her escape attempts and her efforts to survive and endure the hardships of Gilead. In our Nick Handmaids Tale Top 10, we cover some of the important facts about Nick as the audience works their way through the latest season.

He is a source of comfort and strength for June, but fans of the show also learn more about him as an individual in scenes that reveal more insight into his character. For June, the truth about Nick could be much tougher than any of us expected.

Be warned that if you haven’t seen every episode to date, this article may contain spoilers.

Max Giorgio Choa Minghella was born September 16,1985, in Hampstead, London. He is an actor, filmmaker, director, producer, and screenwriter. His late father was an Oscar-winning director and his mother is a choreographer. Minghella went to Columbia University, where he said he was disappointed with the frat parties. If you want to enjoy the same movies as the self-proclaimed “film nerd,” check out Michael Bay movies and anything with a strong female lead. 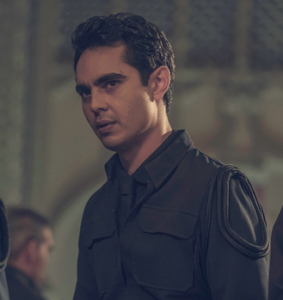 Fans since the beginning remember Emily’s warning to June, that there’s an Eye in her household. June figures out that it’s Nick, which at first upsets her. Pryce, who later becomes a Commander, recruits Nick to work for him long before the takeover. He is assigned to be Commander Waterford’s driver and, as an Eye, is assigned to monitor the activities of the Commander.

8. Nick is the father of June’s second child.

Serena Joy wants a child more than anything, and her decision to have June sleep with Nick is proof of that. She suspects that the Commander is sterile and tells June to try with Nick instead. They have clinical sex with Serena in the room, but later June returns to sleep with him again, this time much more passionately. That is the start of their relationship. When June learns that she’s pregnant, everyone in the household except for Fred understands that it is Nick’s baby.

7. He helps her attempt to escape Gilead.

Nick loves June, and understands that means losing her. He decides to help her try to escape, even though he won’t be able to go with her. He manages to get her to the building where the Boston Globe used to be run. They meet there from time to time and continue to sleep together, but the escape attempt ultimately fails. Nick is heartbroken at her recapture and promises he tried everything to help her escape.

But it isn’t his choice. Commander Waterford asks Commander Pryce to reward Nick, which he does at the Prayvaganza by giving Nick a wife. Eden is just a girl, and that—coupled with the fact that he is in love with June—makes him struggle to be with her. Offred explains to Nick that if he doesn’t sleep with Eden, his wife will report him for being a gender traitor, so he has unpleasant, undesired sex with her.

5. He gets Commander Cushing arrested.

When Commander Pryce dies, Commander Cushing takes control of the Eyes. His first investigation is into who helped June’s escape attempt. Nick and Serena both know that Cushing won’t stop until they’re caught and he’ll end up on the Wall, so Serena gets Nick’s help filing paperwork that will have him arrested. It works, and the “evidence” from the Eyes has him permanently removed from the series, leaving the household safe for now.

4. Nick’s actions lead to the Waterford’s being kicked out of Canada.

June, in a nervous fit, decides to burn the letters from Jezebel’s. However, Nick catches her before she can burn them all and saves the rest. When he goes with Fred and Serena on their diplomatic trip as security, Nick brings the letters with him. Luke and Moira protest the Commander at his hotel, and Nick realizes that Luke is June’s husband. He gives Luke the bundle of letters, and Erin, Luke, and Moira post them online, which results in the Canadian government sending the Gilead delegation away.

3. His wife chooses to die because he doesn’t love her.

Nick finds it impossible to love Eden, the child he was forced to marry. Eden realizes that when she kisses Isaac, the Guardian stationed at the Waterford household. She wants him to be upset that she cheated on him, but he can’t be. As a result, she decides to run away with Isaac. When they’re caught, Eden and Isaac are both drowned at a public execution in what used to be a public swimming pool complex.

In season three, Nick is promoted to be a Commander, which means he will be sent to the front at Chicago. He does his best to still be with June for as long as he can, though he is furious that she didn’t escape when she had the chance with Emily and Nichole. He says goodbye to her at Commander Lawrence’s house and, in Washington, manages to hold her hand for a moment. However, he is sent away to Chicago regardless.

June meets three diplomats from Switzerland who want intelligence from her about Gilead. She says that they should talk to Nick, as a Commander, and the Swiss say they will help protect Nichole from Gilead if she brings them Commander Blaine. However, Swiss talks with Gilead continue their discussions because they do not think that Nick can be trusted. The last time the audience has seen him so far in season three, in “Household,” he is on his way to Chicago.

And that concludes our Nick Handmaids Tale Top 10. Did we leave out anything important?