It is basically impossible not to love Janine. She is a sweet, gentle Handmaid who struggles with life in Gilead but tries to make the best of it. The audience is constantly torn between her small signs of rebellion and her adoration of Aunt Lydia. However, she has proven throughout the series to be a faithful friend to June Osborne, the protagonist and a fellow Handmaid. Keep reading our Handmaids Tale Janine Guide for all the details!

For everything you could need to know about Janine as you watch the latest season of The Handmaid’s Tale, look no further. Keep in mind, however, that there may be spoilers ahead if you aren’t caught up in the series.

10. Janine is played by Madeline Brewer.

Madeline Brewer was born in Pitman, New Jersey on May 1, 1992. She is a classically trained singer who graduated from the American Musical and Dramatic Academy in 2012. A year later, she made her television debut on Orange Is the New Black, her first acting role ever. True to her humble roots, she returned to waitressing right after shooting the first season of OITNB. She was the main character in Netflix horror flick Cam in between playing Janine.

9. She used to be more rebellious than she is. 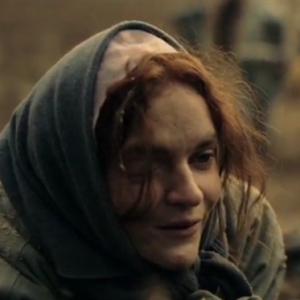 At the Red Center, Janine tried to stand up to Aunt Lydia. She shouted at her, “f*** you.” Then, she was punished—her right eye was cut out. Soon after, she confessed to her fellow Handmaids that she was gang-raped. Aunt Lydia tells Janine that she brought the assault on herself. After the other Handmaids shame Janine for it under orders, she suffers a mental breakdown and has been meek and slightly unwell ever since.

8. She has serviced three different men in the series.

Janine begins the series as Ofwarren in the Putnam household, where she bears a child. She names the girl Charlotte, though Mrs. Putnam calls the baby Angela. After weaning Charlotte/Angela, Janine is sent away to become Ofdaniel. When Janine kidnaps her baby and tries to kill them both, she is punished by being sent to the Colonies, where she works with Emily until they are both brought back due to a shortage of Handmaids. That is when she becomes Ofhoward.

7. Janine believes that Commander Putnam is in love with her.

During her time as Ofwarren, Janine performed many sexual acts with Warren that his wife refused to do. To convince her to break the rules like this, he falsely promises her that they can run away together and be a family with Charlotte. Janine hates Mrs. Putnam as a result, especially when she tries to take “Angela” away from her. When the truth comes out, Warren is punished and Janine is sent away, though originally, she was supposed to be stoned to death by the Handmaids.

6. In the Colonies, she organizes a wedding between two Unwomen.

Unwomen in the series are women who do not satisfy the needs or desires of Gilead. They are sent to the Colonies, where they are worked to death. Emily, who was sent there for killing a Guardian, insists that Janine needs to be realistic, but she cannot shake Janine’s gentle optimism. Janine finds Sally, a rabbi, and arranges for her to unite Fiona and Kit in marriage. Kit dies soon after the ceremony, but Janine believes it was a beautiful and important thing to do.

Janine’s child from her time as Ofwarren falls ill, and Janine panics when she finds out. Serena convinces Mrs. Putnam to let Janine see her baby in the ICU, so June and Janine go with Aunt Lydia to look at the child. When it is determined that there is nothing to be done for the baby except pray, Janine is permitted to hold her Charlotte to say goodbye. The next morning, however, it is revealed that the baby pulled through.

Guardian Isaac escorted June and Janine on a shopping trip, and along the way, the two women gossiped. During the conversation, Janine gets a little bit too loud, and Isaac tells her to quiet down, calling her an unwoman. Furious, Janine responds that she’s having a conversation with June and then says to him, “suck my dick!” in what feels like a return to her rebellious roots with Aunt Lydia. Isaac hits her in the face with the butt of his gun and then drags June home.

3. Janine is hurt even when she tries to make friends.

June’s latest walking partner, Ofmatthew, tells Aunt Lydia about June’s conversation with the Martha in the household where Hannah lives. As a result, the Martha is hanged. June and the other Handmaids bully Ofmatthew, with the exception of Janine. At the grocery store, Loaves and Fishes, Janine tries to make friendly, kind conversation while June and the others revel in her misery. Growing increasingly nervous, Ofmatthew has a breakdown and uses a can of food to beat Janine, then almost shoots Aunt Lydia.

2. She gets to break uniform regulations.

Janine is later hospitalized because her wounds from Ofmatthew’s attack became infected. She was hit in her right eye socket, where the eye was removed at the Red Center, and the new wound brings shame to Janine. Aunt Lydia, seeing Janine’s sorrow and remembering her near-constant obedience and dedication, and despite ordering her execution earlier, decides as an act of kindness to give Janine an eyepatch. Janine comments that she looks like a pirate, but it evidently makes her happy.

1. She isn’t just alive—she’s ready to help June with her new mission.

In season three, after Hannah and the McKenzie household are sent away from the district where June is assigned, she becomes increasingly impulsive. Finally, she decides that she wants to help the children of Handmaids from before Gilead escape. Janine overhears June and Alma discussing this new idea, which June convinces Alma to help with because she knows where Alma’s son from before is and what he looks like. Janine says she wants to help too. June pretends that Janine’s son from before, Caleb, is alive in California and not dead to save her feelings and accepts Janine’s help.