GLOW is an ensemble series, following the lives of the several female wrestlers, the director of the show, and the main producer. However, the show seems to be centralized around one character more than any other: Ruth Wilder. Ruth is one of the women who wrestles for the Gorgeous Ladies of Wrestling as Zoya the Destroya and she takes a pivotal role in the series, putting her all into her work and encouraging everyone else to do the same.

Our Zoya The Destroya Top 10

To really enjoy the show, fans need to understand Ruth. Here you will find a list of the most important information about Ruth so that you can prepare to enjoy season three, now streaming on Netflix. Keep in mind that if you are not caught up on the series, the list may contain spoilers. 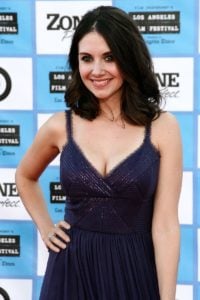 Alison Brie is a Hollywood native, born there on December 29, 1982. Her mother worked at a child care non-profit, while her father was a musician who also worked as an entertainment reporter. As a result of her father’s work, she became interested in show business at an early age. She studied acting both at the California Institute of the Arts and the Royal Scottish Academy of Music and Drama. She is currently married to Dave Franco. Her other acting credits include films and television shows like The Lego Movie, Community, Mad Men, and BoJack Horseman. She was nominated for Golden Globes in both 2018 and 2019 for her role in GLOW.

9. Ruth is a struggling actress.

Unlike Alison Brie herself, Ruth is originally from Omaha, Nebraska, and she moved to Los Angeles for auditions. She studied August Strindberg’s work, which means she frequently relies on method acting for her work. Ruth cannot seem to land a part in anything, often wishing the female characters had more active roles and not fitting the stereotypical good looks required for roles. She auditions for GLOWon a whim, not knowing until she arrives what the audition is even for.

8. She has to work hard to overcome the label of “homewrecker” among her coworkers.

Ruth’s role in GLOWcoincides with the end of a brief affair with Mark, her best friend Debbie’s husband. He likes Ruth because he believes she is “normal” and “real” compared to former soap opera star Debbie. Mark reveals the truth to Debbie, who storms into the ring during training for GLOWand attacks Ruth. Debbie, who has a newborn child, is justifiably furious, and the other wrestlers take her side. When Debbie is cast in GLOW, she expects Ruth to be fired, creating tension on set when both women are told they get to keep working.

7. Ruth creates a “heel” character that Debbie gets to beat in the ring… again and again.

To make wrestling entertaining, the whole cast and crew understands that some women need to play villains, also known as “heels” that make the heroic lead characters look better. Under Carmen’s instruction, the women begin to develop personas, some of which are rooted in stereotypes based on looks like Arthie’s “Beirut the Bomber.” Ruth dreams of playing a lead, but Debbie gets to play American sweetheart Liberty Belle. As a result, Ruth creates Zoya the Destroya, a Soviet heel with a disdain for the United States and a thick Russian accent.

6. She develops a relationship with a cameraman for the show.

Fans of the show have noticed the obvious chemistry between Ruth and director Sam Sylvia. However, Ruth finds herself in a relationship with cameraman Russell Barroso instead. Sam ridicules Ruth and the relationship, leading to arguments between him and her. They fight even more as Ruth takes liberties with the show, including directing the show’s opening sequence. However, Sam begins to come to terms with Ruth’s relationship even as Debbie tries to sabotage the relationship, holding Ruth back after filming so that she cannot go out with him.

5. Debbie and Ruth’s tension comes to a head when there is an accident in the ring.

Debbie grows more and more unhappy with her lack of power over the show and with Ruth’s attempt to find happiness in a new relationship after her own relationship was destroyed. The two struggle to work together, but things reach a breaking point when Debbie enters the ring drunk and under the influence of cocaine. Debbie is unable to perform the fight safely, going so far as to break Ruth’s ankle. This puts a devastated Ruth on the sidelines for eight long weeks.

After Debbie breaks her ankle, Ruth is depressed and struggles to find a role with the series, which has essentially become her life. She helps Sam behind the scenes, giving him story ideas for the progression of the show. She also creates a character that does not wrestle for skits between matches named Olga, who is the good twin sister of Zoya. In the final episode of the show, when Ruth is able to get into the ring again, Sam lets Zoya win the GLOW Crown.

3. In Las Vegas, she continues to struggle with her role as a heel.

The opening of season three of GLOW features Debbie as Liberty Belle and Ruth as Zoya the Destroya performing a skit on television to promote the show. They are interviewed by a real newscaster during the launch of the Challenger space shuttle. Ruth as Zoya ridicules the United States and its space program, not actually watching the live footage as it is aired. When the shuttle explodes, Ruth is still making jokes, and Debbie has to stop her. Ruth wants the show to feature some sort of apology from Zoya that night, but Sam and Debbie push back.

2. Ruth begins to doubt her relationship with Russell.

In season three, the audience watches Ruth struggle with a long-distance relationship. They were especially difficult in the 1980s, when you could not FaceTime or Skype your significant other. Settling for phone calls and infrequent visits, the pair struggles to keep their chemistry alive. As Ruth spends less time with Russell, she spends more time with Sam. It becomes more and more difficult for her to figure out which of the two men she actually loves.

1. Season three poses (and answers) a lot of questions for Ruth.

One of the most important questions is who in the love triangle will Ruth choose: tough but sensitive Sam or kind, reliable Russell? However, the future of GLOW is once again called into question when they have to decide whether or not to extend their run in Las Vegas, which would change everyone’s lives. The women, including Ruth, are torn, especially since they are living in a hotel away from their families. Sam’s daughter, Justine, tries to make a movie, and aspiring actress Ruth hopes for a part. The season explores Ruth’s career in new ways.

And that concludes our Zoya The Destroya Top 10. Did we miss anything? We want to hear from you in the comment section below! And stick around for the rest of our GLOW content, including our Florian GLOW Top 10.