Dembe Zuma is the stoic and commanding bodyguard of Raymond Reddington on The Blacklist. While initially introduced as a loyal friend and protector to Reddington in Season 1, more details about his mysterious and secretive past have slowly been revealed throughout the shows seven seasons. While there may be some details that remain a mystery, we at Nerds and Scoundrels have compiled a petty thorough list of some of the most interesting and intriguing facts about this character. Check out the top ten Dembe Zuma facts every fan of The Blacklist should know!

Below are ten facts about Dembe Zuma, in no particular order.

10. Dembe is played by Hisham Tawfiq

While Dembe may be his most well-known television role, actor Hisham Tawfiq has quite an impressive resume behind him. The 49-year-old actor has appeared in several popular television shows, including Law & Order: Special Victims Unit, Kings, and 30 Rock. He’s also starred in many films, including Notorious (2009), Dead Man Down (2013), and Gun Hill (2014). Before becoming a full-time actor, Tawfiq worked a variety of different jobs, from serving in the U.S. Marines, working as a corrections officer, and serving as a firefighter.

9. Dembe was not in the original script. 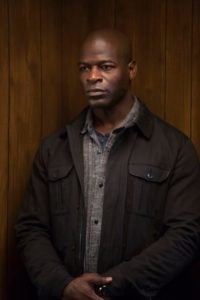 In an interview with NBC News, Tawfiq revealed that Dembe was not in the original script. He elaborated on creating the role himself in the audition role, stating, “I remember going in for that audition and there were no lines. I basically had to create my own character just from the foundation that they gave me. So I took all of that from my life.” Tawfiq drew upon his non-acting jobs as a platoon leader in the Marine Corps where he served in Operation Desert Storm, his time as a corrections officer in the Sing Sing Correctional Facility, and as a firefighter with the New York City Fire Department, to develop his character.

8. Dembe was not originally intended to be a long-standing character.

When Dembe was first introduced on The Blacklist as a former freedom fighter from South Sudan with no lines, he was merely billed as a recurring guest star, a status he remained in for the first two seasons of the show. It was only in Season 3 when his character was bumped to “main character” billing and has remained there since. Tawfiq has opened up to AM New York about his experience in the role, admitting he believed the role would be eventually written off but is ultimately grateful to have this job.

Dembe’s history was revealed in Season 2, Episode 6, “The Mombasa Cartel.” As it turns out, he was neither from South Sudan, nor a freedom fighter. He is the youngest son of Samwel Zuma, a farmer from Koidu, Sierra Leone. After Samwel reported low-ranking operatives of the Mombasa Cartel to the police, his entire family was brutally slaughtered with a six-year-old Dembe as the sole survivor. The Cartel took the young boy and sold Dembe to human traffickers.

6. It is still unclear as to how Dembe escaped from the Eberhardt Cartel.

At some point before meeting Reddington, Dembe was being held by the Eberhardt Cartel but escaped. Currently, there are three prevalent fan theories as to how he escaped. Some fans theorize that the cartel sold him off as a child soldier and Dembe escaped on his own while in Africa. Others theorize that Reddington played a part in his escape. Finally, some argue that he was simply left behind at the age of fourteen when he was too old and no longer valuable as a child soldier.

5. Dembe has known Reddington since he was 14.

In 1993, Raymond Reddington found a fourteen-year-old Dembe chained to a pipe in a basement of a brothel in Nairobi. He was barely alive and had been left to die alone in the darkness. Reddington took pity on the boy and freed him from his clutches, and eventually helped him rebuild himself and begin a new life. The two of them have remained close confidants ever since.

4. Dembe is an accomplished young man.

After Reddington found and saved Dembe, he helped the young man get back on his feet and saw to his education. Dembe went on to study English Literature, eventually earning a Bachelor’s degree on the subject. In addition to his studies, Dembe learned to speak four languages fluently and even studied six additional languages well enough to get by.

3. Dembe cares only about three people in the world.

Dembe once stated that he only has three people in the world: his daughter, Isabella, his granddaughter, Elle, and Raymond. He additionally believes these three people are also the only three who care about him in return. Actress Victoria Janicki portrays Isabella in an episode, and the audience also sees a photograph of a cute baby girl who’s supposed to be Elle.

2. Dembe has known about Reddington’s real identity the whole time.

The shocking Season 5 ending that culminated into The Blacklist’s biggest twist that revealed Raymond Reddington has been dead this whole time may have come as a shock to fans – but Dembe has been aware of the ruse since Season 1. In an interview with AM New York, Tawfiq elaborated on the trust between Dembe and Raymond Reddington, saying, “It’s pretty clear through the five seasons that Dembe — and our writers may turn around and make me eat these words — but Dembe, I think, knows everything.” Tawfiq elaborated that Red and Dembe’s entire relationship is built on trust, and therefore it is likely that the former shared his huge secret with his bodyguard early on. He has also struggled with keeping the secrets about Katarina Rostova from Elizabeth Keen.

At the time of writing, The Blacklist is seven episodes into its seventh season and Dembe remains alive and well. He is still at Reddington’s side, and it looks like that’s where he’ll stay for the foreseeable future. Many of Reddington’s confidant’s (Like Mr. Kaplan) have fallen. With all the twists and uncertainties in a show like The Blacklist, who knows how long Dembe will last?

And that concludes our Dembe Zuma Top 10. Did we leave anything out? If so, don’t forget to let us know in the comments!

Ten Facts About Elizabeth Keen Every Blacklist Fan Should Know

The Blacklist: Ten Things Every Fan Should Know About Tom Keen