One of the most popular shows on Netflix, GLOW has just released season three, streaming now. The first two seasons were received with intense praise, and season three is no exception. It is the fictionalized story of the very much real female performers of GLOW, the Gorgeous Ladies of Wrestling. Read on to learn more from our Florian GLOW Top 10.

Most of the characters on the show have not one but two personas as they deal with their personal lives and their stage performances. Some characters are more mysterious than others, including Florian. He plays an interesting role in Bash’s life and in the series as a whole. For everything you need to know about Florian before you continue watching GLOW, look no further. But be warned, there may be spoilers.

Florian was a sort of breakout role for Alex Rich, whose first acting credit was in 2012. He has a relatively private personal life, using his social media primarily to celebrate his roles and the work of others. His longest-running role to date is as young Pablo Picasso in National Geographic’s Genius, which follows the lives of famous figures in history. He worked with Antonio Banderas, who played the older Picasso. As a result of the limited series, Rich was nominated for a Broadcast Film Critics Association Award as Best Supporting Actor in a Movie or Limited Series. 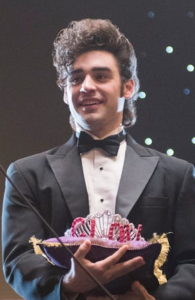 This may seem like a minor role, though it has a major impact. Florian is seen throughout season one of the series, usually with Sebastian “Bash” Howard. His presence is felt by every character in the series, especially by Bash and Rhonda, even after his exit from the series. If you want to really understand Bash as a character, you need to understand Florian, for better or for worse.

8. He and Bash have known each other for a long time.

All of the main characters in the series, with the exception of Justine, are adults when GLOW takes place. The show never depicts flashbacks, though the past is just as important as the present and the future when it comes to the plot. Every character’s motivations are rooted in a combination of their past and their hopes for the future. When it comes to Bash and Florian, they have an extensive past together. The two have known each other since they were in third grade, sticking together since boyhood.

7. The dynamic shifts from friends to boss and employee.

Florian and Bash do not, unfortunately, stay as close friends. Bash is from the Howard family, a very rich old-money family in California. This alienates Bash from many of the people in his life as he is excessively wealthy and often wasteful with his money. Bash decides one way he wants to spend his money is by hiring Florian to work for him as a butler—so he does. This is how the audience is introduced to Florian, as an employee of the Howard household.

6. He is incredibly thoughtful.

When the GLOW team meets with Bash, their producer, in season one, they go to his house. Everyone gets incredibly drunk, which is likely what Bash wants as a happy-go-lucky, fun-loving guy who is producing the show because he thinks female wrestlers are hot. Debbie in particular gets drunk, and ends up needing to vent to blow off steam. Florian is the one who sits and listens to her as she works through her feelings.

5. Florian also shows up in the ring.

GLOW is, especially at the beginning, a home-grown show. It depends on the support of family and friends to stay afloat in the early days, when it is struggling to get off the ground. Producer Bash and director Sam Sylvia recruit whoever they can to help. Sam, for example, has Cherry’s wife act as the referee. Bash uses Florian in the show as well. When Liberty Belle is crowned, Florian is the one who brings out the crown on its pillow, just before Welfare Queen takes it. The image of Florian carrying the crown is very much reminiscent of his work as a butler.

4. He does not stay with Bash forever.

In season two, Florian is nowhere to be seen. Bash seems to be a bit aimless without his longtime best friend. Finally, it is revealed that Florian had to quit. Bash’s paychecks to Florian bounced, and without getting paid he had no reason to stay. This creates emotional turmoil in Bash’s life when he realizes that you cannot pay someone to be your friend and think that establishes a real, lasting friendship. In alienating Florian with the boundary between employer and employee, he lost a friend.

Bash wants to recover his friendship with Florian even if he can no longer pay him. The multiple bounced paychecks infuriate Florian, who needs to money. The two men have a huge fight, in which Bash reports to friend and wrestler Carmen that Florian “said I was being completely solipsistic. I looked it up. It means that you think you’re the center of the universe and that you don’t care about other people.” Carmen encourages Bash to look for Florian, who is nowhere to be found, and attempt to mend the relationship.

2. Searching for Florian is when Bash realizes that his friend is gay.

Remember that the series takes place in the 1980s. Homosexuality was generally frowned upon, so it makes sense that Florian would remain in the closet at that time. Bash does not realize his friend’s sexuality until he goes to look for Florian. Bash, accompanied by Carmen and Rhonda, goes to check a bar called “Shenanigans.” Once inside, they realize it is a gay bar and the bartender, who knows Florian, also knows a lot about Bash after conversations with Florian. Being in the gay bar makes Bash uncomfortable because he had no idea Florian was gay.

Bash receives a call from a hospital in San Francisco informing him that Florian passed away, with Bash listed as his emergency contact. The woman informs Bash that Florian “technically” died from pneumonia, but tells him no funeral home will take the body. Funeral homes refused to process bodies that died from HIV/AIDS, and pneumonia was simply the infection that killed Florian because of his weakened immune system from the disease. Bash refuses to claim the body and later, horrified by the whole thing, has a cleaning crew scrub down his entire house, especially Florian’s room. However, all of this leads to questions about Bash’s own sexuality.

And that is a wrap on our Florian GLOW Top 10. Did we leave out anything important? If so, let us know in the comment section. And don’t forget to check out the rest of our GLOW content, including our Zoya The Destroya Top 10.