No show would be complete without a leading lady. While the lead of GLOW is Ruth Wilder, played by Alison Brie, the lead of the show-within-a-show is Liberty Belle. Real name Debbie Eagan, Liberty Belle is the American sweetheart star of the Gorgeous Ladies of Wrestling. Keep reading to get the whole story in our Liberty Belle GLOW Top 10.

Though the focus of most of the Netflix series (season three now streaming) is Ruth Wilder, the show has an ensemble cast and all of the women are complex, developed characters. Debbie is no exception. She has multiple layers to her personality, all of which are important to understanding her and how she fits into the series as a whole. For a summary of all things Debbie, look no further! But be warned: you may find spoilers ahead if you are not caught up. 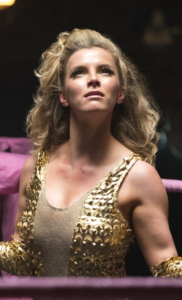 Betty Gilpin was born July 21, 1986 in New York as Elizabeth Folan Gilpin. She is married to Cosmo Pfeil, her husband since August 6, 2016. Aside from GLOW, she is known for Isn’t It Romantic, A Dog’s Journey, Masters of Sex, and Nurse Jackie. She hopes to serve as a feminist icon, playing strong female roles in most of her work. Gilpin has said of herself, “My brain is a room full of women who take turns at the wheel.” She was nominated for the Emmy for Supporting Actress in a Comedy Series for her role as Debbie, but lost.

9. She used to be best friends with Ruth.

Though everything changes for Debbie and Ruth when Debbie learns that Ruth had a brief but very real affair with her husband, Mark. They go from taking workout classes together to fighting one another, both for real and for the ring. Debbie attacks Ruth at training for her role, inspiring Sam and leading him to cast her as the lead. Ruth acts as Debbie’s “heel,” losing matches as the villain so that Debbie looks good, but being coworkers does not make them friends.

8. Her career has made her feel undervalued and unimportant.

Debbie wants nothing more in life to be taken seriously; this is her motivation throughout the series. Before she joined GLOW, Debbie was a soap opera actress, playing popular character Laura Morgan on Paradise Cove. Her popularity does not give her any creative freedom unfortunately. Her character is put in a coma for an entire season to punish Debbie for improvising lines. Then, when she gets pregnant, she is fired and replaced by another actress.

One could argue that playing a Gorgeous Lady of Wrestling who prances and rolls around the ring in a leotard is demeaning. Debbie, however, feels empowered by the experience. Outside of her role on the show, she is an estranged wife, then a divorcee, and always a mother. In the ring she is a strong fighter defending America from the Soviet threat. Her body is not defined by her husband, her son, or her director on GLOW, which makes her incredibly happy.

6. She becomes a producer for the show…

The television station that the women work for, K-DTV, asks all of the women to sign new contracts. Debbie decides to take the opportunity to increase her status on GLOW. She amends the contract to become a producer, giving her more decision-making power. Bash and Sam struggle with Debbie in her new position because she wants to influence her character and the show’s direction. This also puts her at odds with her fellow wrestlers.

5. …and uses it in some negative ways.

With her new power as a producer, Debbie manipulates and abuses her control over the show. In one instance, she makes Ruth stay late after the show to edit material. Ruth reluctantly agrees and works overtime, missing a date with cameraman Russell. When Debbie is upset over Mark’s new relationship, shespends time in the producers’ office and finds Sam’s stash of cocaine. After drinking and using cocaine, she gets in the ring and is way too aggressive, breaking Ruth’s ankle during their match.

4. At the start of season three, she explores different types of relationships.

The first two seasons of GLOW see Debbie struggling with the loss of her husband and mourning that relationship. When season three begins, however, she tries her hand at new relationships just like Mark did. In Debbie’s case, these new relationships are one-night stands with hotel employees. From waiters to bellhops, Debbie sleeps with a variety of young men in an effort to fill her emotional void created by her divorce and her time away from Randy, her son.

3. Debbie and Bash butt heads over the direction of the show.

Bash and Debbie were having problems with show-running back in season two, but working in Las Vegas puts a whole new pressure on the dynamic between them. Whenever they argue about anything, Bash insists that because most of the money is his and because his name is on the marquee outside the hotel, he is the one who ultimately makes decisions. The two enter into a major battle when Bash insists on extending the show’s Las Vegas run and the women feel like they are sacrificing their families in exchange.

2. She tries to take on a more present role in Randy’s life.

After the divorce, Randy stays with Mark, especially now that Debbie is living in a Las Vegas hotel. She flies back and forth between Las Vegas and Los Angeles as often as she can so that she can spend weekends with him when she has time off. However, the travel takes a toll on her stress levels and she still feels absent in his life. The problem comes to a head when Debbie misses Randy’s first steps. As a result, she decides to bring Randy to stay at the hotel with her.

1. Season three is a period of transition for Debbie and the show.

Las Vegas has its pros and cons, and the women of GLOW have to decide what they want for themselves, even as Bash is trying to decide their futures for them. The big question is whether the show will continue on in Vegas. For Debbie, there is a question of the direction of her relationships. She meets an older businessman, J.J. McCready—though she calls him Tex. Debbie has to decide how she wants this new relationship to proceed, making it a large part of her arc this season.

And that wraps up our Liberty Belle GLOW Top 10.