With season three of GLOW now streaming on Netflix, fans may find themselves needing to catch up on the series before they continue watching. There are a lot of different women who make up the ensemble cast of the series, each with their own complex personalities and concerns. Keep reading our Justine Glow Top 10 to learn more.

The newest season’s release means fans need to once again keep track of all of the many varying characters. One character who has only a minor but significant role in season three is Justine, a pivotal individual in the first two seasons of the show. Her return in the latest season is no doubt just as important as her presence in the first two seasons, so if you need a refresher on all things Justine, look no further. However, keep in mind some of the information might be spoilers if you are not caught up on the show.

Brittany Noelle Uomoleale uses the stage name Britt Baron in her acting career. She started on the stage with Chicago’s Steppenwolf Theatre Company, where she was in productions of East of Eden and Grand Concourse. Baron attended the University of Michigan. She has a Bachelor’s of Fine Arts in performance and a Bachelor’s of Arts in communications. Aside from GLOW, she is also known for roles on Grey’s Anatomy and Rob Riggle’s Ski Master Academy. She said of working on GLOW, “I grew up listening to Kate Nash music. Now I get to sit on her shoulders and choke her out. Dreams I didn’t even know I had came true.”

9. Justine has been with the show since the beginning. 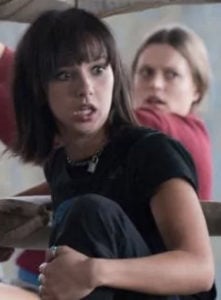 From the first audition, Justine was with GLOW. She came in with a punk rock vibe that left her looking like an angsty teenager. Sam, thinking she looked young for nineteen, was hesitant to hire her—but only for a second. She insisted that she was nineteen and took on the wrestling in-ring persona Scab. Later, it is revealed that Sam was right to think she looked young; Justine is only seventeen years old when the series begins.

8. Sam thinks she is a crazy fan at first…

It becomes obvious soon after training for GLOW begins that Justine is a fan of Sam’s work. Sam Sylvia, the director of GLOW, started his career making exploitation films. For those who do not know, an exploitation film uses niche genres and pop culture trends to create thrills in the movie, usually focusing on some sort of morbid elements. They usually have a cult following, and Justine was a part of Sam’s cult. He began to find her attention and insistence on his not giving up on filmmaking obsessive.

7. …then, he realizes she is his daughter.

Sam accuses Justine of wanting to sleep with him because of how much she likes his films. She is horrified by the accusation and finally tells him the truth—she is his daughter. Seventeen years ago, Sam and Justine’s mother, Rosalie, both attended a Black Panther Party rally in Sacramento. When it was shut down, they left together and had a one-night-stand, during which Rosalie got pregnant. Justine joined GLOW not to sleep with Sam, but to meet her father.

6. Her being with the show is a risk.

Justine wanted to meet Sam so badly that she ran away from home to find him. When she joined GLOW, it was a way to spend time with him and earn some money, given that she no longer has support from her mother. She gave up her life with Rosalie and her education to join GLOW, putting her at risk of getting caught for truancy or for running away. The thought of either happening concerns Sam, who wants to feel paternal.

5. When Sam knows the truth, he insists that Justine sees him as a dad and not a director.

At the start of season two, Sam decides that things with Justine need to change if she is going to stay with the show. Instead of living in the motel with the other wrestlers, Justine moves into Sam’s house with him. He no longer lets her wrestle; Justine instead plays a teenager named Lisa in skits between matches. Sam enrolls her in high school, where she continues working toward graduating after taking time off when she was pretending to be nineteen.

4. But that dream life can only exist for so long.

Justine and Sam would have liked to think that they could continue living like that forever, but things inevitably had to change. As GLOW became more popular on television, it gained a wider audience. One of those new audience members happened to be Rosalie, Justine’s mom. She is furious to see Justine on television as Lisa, so she travels to Los Angeles to Sam’s house and demands that Justine goes back to Sacramento with her. After raising her daughter alone her whole life, Rosalie has no intention of letting Sam take over.

3. Justine tries to run away again.

During her time as a wrestler living in the motel, Justine met a pizza delivery boy named Billy Offal. She ordered pizzas as a way to get to see him more often, and then began dating him. When Rosalie insists that Justine return to Sacramento, Justine is upset. Sam and Rosalie decide that Justine can go to the school dance before leaving for good. While there, Justine plans on running away with Billy and moving to New York. In the end, however, she is talked out of leaving and she goes back home with her mom.

Season three sees Justine giving Sam a copy of her screenplay, which she has finally completed. Sam is working on a screenplay of his own but promises that he will read it and give her some feedback. After he finishes it, he gives it to Ruth and asks her to read it as well to see if she has the same opinion that he has. Sam thinks it is incredible, better than anything he has ever made before, and Ruth agrees that Justine has written something amazing.

After Sam says he loves the screenplay, he and Justine decide to bring it to producers and see if anyone will make it with her. She asks Sam to direct it, which he agrees to do, causing him to leave GLOW for good. The duo goes to Hollywood to try to find producers, and fans of GLOW spend the season hoping that Justine will make her movie and trying to figure out if any of the GLOW ladies, like aspiring actresses Ruth and Sheila, will get a part.

And that concludes our Justine GLOW Top 10. Did we cover all of the important stuff? Let us know what you think below. While you’re here, check out our Liberty Belle GLOW Top 10 as well!