Campaign 3 of Critical Role is cruising right along, and we’ve already had some interesting backstory questions answered. What we haven’t had answered is the question “who is Travis playing in Campaign 3?” Sure, we got a short reprisal of Bertrand Bell for a few episodes, but that was never the long term plan. On the 12/9/21 episode of Critical Role, we finally got the answer.

At the end of Episode 7, the characters slip out of a theater after defeating a tentacled monster in an alleyway. As the characters leave, Imogen notices a small, muscular figure in a cloak leaning against the wall and watching the group carefully. Curious, she makes contact with the individual telepathically, which seems to confuse him. She then approached the figure, only for DM Matt Mercer to finally call Travis Willingham back to the table! 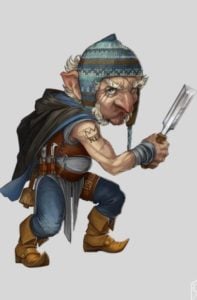 it has been a few weeks since we’ve seen Travis at the table (although we’ve heard him laughing loudly in the background plenty of times.) His return seemed to surprise the other players, especially as we learned about who Travis would portray this season.

In campaign 3, Travis’ character is Chetney Poc-O-Pea. We learned from the onscreen graphics that Chetney is a rogue of the gnomish persuasion. to this point, we don’t have any information on a subclass. In hilarious continuity, Chetney also appears elderly with wisps of gray hair curled from behind (and out of) his ears. Chetney also briefly mentioned during the episode that he is a crafter with a set of tools hanging from his belt.

Does Chetney seem familiar to you? If you follow along with the special episodes of Critical Role, he should. Chetney is a take on Travis’ character from a previous Christmas special named Chutney Chocolatecane. Some have speculated that the knitted cap and the animated snowflakes on his stat card are shoutout to the original character. Chutney was a Mastermind archetype rogue, and we’ll have to see if Chetney follows suit or takes a different path.

So, that’s who Travis is rolling with in Campaign 3 of Critical Role. Chetney seems like another oddball character that could fit right into this budding group of adventurers, and I look forward to seeking how it all plays out! Have any thoughts? Hit us up in the comment section.

Critical Role: What is the Silken Squall?