Fans of June, the protagonist of The Handmaid’s Tale, have a soft spot for Moira. June’s best friend since childhood, Moira is another Handmaid. Much of her story is told parallel to June’s tale because they are frequently separated. However, we become familiar with her when they reunite at the Red Center, where they are trained to become Handmaids. From there, her journey twists and turns its way throughout Gilead and Canada.

As season three progresses and Moira’s story continues, there is a lot to know about her. Before you keep reading our Moira Handmaids Tale Top 10, remember that if you aren’t caught up in the show, then you may find spoilers here.

10. Moira is played by Samira Wiley.

Samira Denise Wiley is both an actress and a producer. She is a graduate of Juilliard.Other than The Handmaid’s Tale, she is an actress in Orange Is the New Black. That is where she met her wife; Lauren Morelli is a writer for the show. They have been married since March 25, 2017. Wiley received an Emmy for Outstanding Guest Actress in a Drama Series for her role as Moira in season two, episode seven: “After.”

9. Her escape made her a legend among the Handmaids. 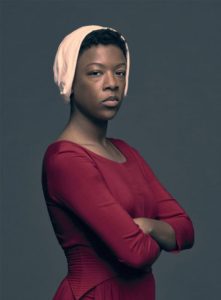 Moira and June worked together to escape from the Red Center when they were being trained there. June is caught and taken back, but Moira is able to make it on the train out of the city. Though her fate after getting on that train is unknown to the other Handmaids at first, the fact that she made it out of the Red Center and wasn’t brought back like June made her a hero to all of the girls.

8. She works for a while at Jezebel’s.

When Moira escapes from the Red Center, she tries to escape. She is caught, however, and brought to a secret brothel called Jezebel’s. One night, when Mrs. Waterford is out of town, Commander Waterford takes Offred there so they can have a night together. There, she spots Moira, who is called Ruby there. They reunite and talk to each other, where Moira says she doesn’t think there’s a way to escape and says she accepts it.

7. June gets her help with Mayday.

June was supposed to pick up a package at Jezebel’s, but wasn’t able to get it. She enlists Moira’s help, but she initially refuses. Then June yells at her for giving up. Moira, realizing June is right, decides to escape by killing a customer, wearing a uniform, and stealing a government car. Before her escape from Jezebel’s, however, she manages to find the package and has it sent to the butcher at the supermarket where June shops.

6. She escapes to Canada.

Moira’s second escape attempt is more successful than the first. After leaving Jezebel’s, she makes it to Ontario, Canada. In a refugee camp, she is given a phone and some money to start her new life in Canada. There, she is able to find June’s husband, Luke, and the friend he is living with, Erin. She moves in with them and begins her job helping new refugees with in-processing.

5. With Nick’s help, she and Luke get Commander Waterford kicked out of Canada.

When Fred and Serena Waterford go on a diplomatic trip to Canada, things seem to be going well at first. However, Nick is in possession of the package that Moira gave to June from Jezebel’s. After Nick realizes that Luke is June’s husband, he gives him the package. It is full of letters written by people suffering in Gilead, pleading for help. Moira, Luke, and Erin publish the letters online, and the next day the Canadian officials tell the Waterford’s to leave.

4. She is Hannah’s godmother.

June reveals to Rita, the Waterford house’s Martha, that her best friend, Moira, was the godmother of her first daughter. Moira has always been an important part of June’s and Luke’s lives. Not only was she June’s best friend: she was there when June and Luke first met. She helped June throughout her pregnancy and was even there when June gave birth. It only makes sense that June and Luke would name Moira their daughter’s godmother.

3. She was a surrogate mother before Gilead.

Moira had a child for another couple before Gilead’s government ever tried to force her to. She receives $250,000 to be a surrogate for a couple in England, though June warns her against it for fear that she might get attached to the baby. The birth of baby Gavin is successful, and he is given to the couple. Moira seems very happy with her choice. Gavin is her only child.

2. Her girlfriend was killed.

After Moira gives birth to Gavin, the doctor she worked with says Moira doesn’t have to be so formal—she’s not her patient anymore. The doctor’s name is Odette. From there, Moira and Odette begin talking, then dating. At the US embassy in Canada, Moira goes through binders of photos of the unnamed dead. After hours of searching, she finds Odette and allows herself to grieve, leaving a photo of the two of them by a memorial.

1. She is still alive in Canada.

In season three, when Emily makes it to Canada, she finds Luke and Moira there. They all spend time together, with Emily and Moira growing close with some time. In “Under His Eye,” Moira takes Emily with her to a protest. There, they yell at the Canadian Immigration Minister, upset that Gilead refugees may not be safe from deportation, including baby Nichole. They fight his security detail and are both arrested.

And that concludes our Moira Handmaids Tale Top 10 List. Did we leave anything important out? IF so, let us know in the comment section!

The 10 Offred Facts Every Handmaid’s Tale Fan Should Know