The Hulu series introduces audiences to several Handmaids, but there is perhaps no more complicated woman in red in The Handmaid’s Tale than Ofmatthew. Audiences never really know how to feel about Natalie, June’s walking partner when she becomes Ofjoseph. While June makes it obvious that she hates Gilead, others would prefer to keep their heads down because life as a Handmaid is better than the life they led before.

Fans of the series need to figure out whose side Natalie is on, but it’s tricky. If you need help figuring Natalie out, look no further than our Ofmatthew Handmaid’s Tale guide! Be warned, though: if you aren’t caught up on season three, there may be spoilers here.

10. Ofmatthew is played by Ashleigh LaThrop.

Natalie, or Ofmatthew, is played by Ashleigh LaThrop. Like Samira Wiley, who plays Moira, she is a black actress playing a Handmaid, deviating from the novel in which all black people were exiled as “Children of Ham.” Aside from The Handmaid’s Tale, LaThrop is known for her role as Brenda in The Kominsky Method and Zion in Commune. She is currently filming Utopia, a series in which she plays Becky.

9. She gets prime seating at the Prayvaganza. 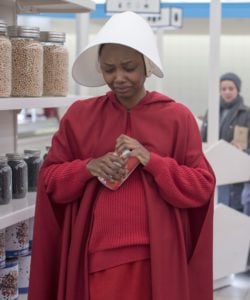 This is no small detail, though it may seem like it. In “Mary and Martha,” Ofmatthew gets a great seat next to Offred at the Prayvaganza in honor of the babies that were born that year. Though baby Nichole is not present because Emily was able to escape with her to Canada, Natalie’s son is brought up to the altar. By then, she had already been reassigned to Commander Matthew Calhoun.

8. Gilead considers her one of the best Handmaids there is.

Natalie reveals to her walking partner, June, that her period is late, meaning she must be pregnant again. She tries to be excited about it, but this will be her fourth child born in Gilead. Ofmatthew is tired of being used solely for reproduction and of giving her babies away. It is logical, then, that she is jealous of June for helping Nichole get out. However, in a moment of kindness, she says she is happy that Nichole and Luke are safe.

7. She spies on June as her walking partner…

Ofmatthew is constantly watching Ofjoseph during their walks together. When they do their shopping, June often has her friends distract Natalie so that she can talk to Alma in private. Loaves and Fishes, the grocery store, is one of the only places where the Handmaids can be together in a group and talk to each other, so June has to take advantage of those opportunities. However, it’s obvious that she’s sneaking away and it makes sense that Natalie would notice.

6. …and reports the information to Aunt Lydia.

Natalie doesn’t just keep what she notices to herself, unfortunately. Aunt Lydia asked Ofmatthew to watch Ofjoseph after the chaos at the Waterford household. When Natalie sees June talking to the Martha in the McKenzie household, where Hannah lives, she reports it to Aunt Lydia. As a result, the Martha is hanged by the Handmaids at a public execution. Though June resists, she is forced to also pull the rope for the execution.

5. So, June and Natalie fight.

June finds out that Natalie told Aunt Lydia after the execution, when they are walking back together. Natalie says she did it because she wanted to remove the temptation from June so that she would stop misbehaving. June knows that the McKenzie’s have moved away, ruining her chance to find Hannah. Furious, June beats up Natalie, with other Handmaids forming a human wall to protect June from being caught.

4. June uses Aunt Lydia to get her revenge.

All of the Handmaids know what Natalie did and decide to shun and bully her. Aunt Lydia is irritated by their behavior, so she has the Handmaids meet to shame June for her sin, her responsibility in the Martha’s death. It doesn’t faze June, who no longer cares; instead, she tells Aunt Lydia that Natalie has sinned too. At one point, Natalie told June that she didn’t want her baby to be born. All of the Handmaids shame her for doubting God’s will, and when she cries, for being a crybaby.

At Loaves and Fishes, Natalie grows more and more tense. Janine attempts to be nice and friendly, the only Handmaid to show Natalie any kindness after what she did. Unfortunately, that meant she was the closest to Ofmatthew. Grabbing a can of food, Natalie bludgeons Janine with it, hitting her face, the socket where her eye was cut out, and her back. She cuts a Guardian’s throat with a glass jar and tries to shoot Aunt Lydia before being shot herself.

2. Life support at the hospital keeps Natalie alive and able to punish June.

After Ofmatthew is shot, she is put on life support at the hospital. They are constantly poking, prodding, and cutting her up, mutilating her body with the sole purpose of keeping her alive only long enough for the baby to be born. Natalie is already considered braindead when she is at the hospital. June, however, is kept there alone, kneeling all day every day praying for Natalie, because they are walking partners. It is Aunt Lydia’s new way to punish June.

1. When the baby is born, Ofmatthew dies.

The Calhoun’s get their baby after months of waiting. In that time, June attacked Serena and cut herself, showing reckless and suicidal tendencies. It is an emergency procedure and Natalie lost far too much blood for recovery to be at all possible. June, a true walking partner to the end, offers to stay until Natalie finally passes away. During her time at Ofmatthew’s bedside, June says she is going to do her best to help children escape Gilead.

Ten Things About Hannah Every Handmaid’s Tale Fan Should Know