Oh, Aunt Lydia. Fans of Hulu’s The Handmaid’s Tale love to hate her. As an Aunt, Lydia Clements is a leader in charge of the Handmaids. She is a cruel and oppressive woman who never hesitates to use violence against the Handmaids to punish them for any and all insubordination. She has been with them from the start, training them at the Red Center before sending them off into the world. Lydia checks up on households and attends every birth. She also uses the Handmaids as executors of punishments for others to keep everyone in check.

Aunt Lydia is a complicated character, one who cares about the girls as much as she hurts them. For everything you need to know about her, keep reading—if you aren’t caught up though, read with caution to avoid spoilers.

Ann Dowd is an American actress born in Holyoke, Massachusetts on January 30, 1956. Since 1984, she has been married to Lawrence Arancio and they have three children together. Aside from The Handmaid’s Tale, she is known for Hereditary and Garden State. With such a long screen and stage career, she has won several awards. One lesser-known honor is that she is one of few actors who has been a guest on all four Law & Order franchises.

9. Her pre-Gilead career explains her role as an Aunt.

Lydia was a lawyer practicing family law before she quit to become an elementary school teacher. Scenes reveal that she was a religious woman who taught a fourth-grade class. It explains her passion for children and families, especially with the rise of infertility. Watching children suffer in unpleasant home environments disappointed Lydia, which explains why she considers Commanders and Wives more fit to parent. Though her intentions may be good, her practices are terrible.

8. After a bad date, Lydia destroyed a family. 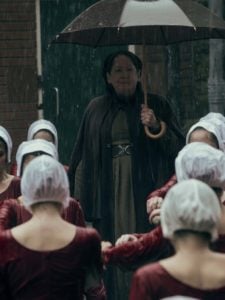 One of Lydia’s students, Ryan, was the child of a single mom, Noelle, who didn’t make great choices. She was dating a married man and tended to go out a lot. Initially, Lydia took Noelle under her wing, helping make sure Ryan got enough to eat. However, things changed after Noelle encouraged Lydia to go out on a date with the school principal. It went well until Lydia tried to have sex with him and he turned her down, saying it was too soon. She was ashamed and angry as a result and decided to report Noelle to Child Protective Services; Ryan was sent to foster care and both Noelle and the principal were horrified by Lydia’s choice.

Fans of the show know that Janine is a lovable but misguided Handmaid who is relatively okay with what happens to her. However, she wasn’t always that way. At the Red Center, Janine expressed horror at the idea of bearing children for Commanders and their Wives. As a result, Aunt Lydia shocked her with a cattle prod and had her right eye removed. Then, she made Janine confess her “sins” and describe being gang-raped. Lydia made all of the Handmaids shame Janine for bringing it on herself. Afterwards, Janine suffered a nervous breakdown.

6. Emily had a bone to pick with Lydia.

Emily has hated Aunt Lydia ever since she was caught in a lesbian relationship with a Martha. She was then forcibly subjected to a clitoridectomy, a form of genital mutilation intended to eliminate any female pleasure during sex. Though she was sent to the colonies, Emily made her return to Gilead and waited for her chance to strike. Finally, when the time was right, Emily as Ofjoseph stabbed Lydia in the back—literally. She had to escape Gilead soon after.

5. She comes up with elaborate forms of punishment.

Aunt Lydia tells the Handmaids to stone someone who endangered a child, but they all refuse when they learn that person is Janine. As a result, Lydia wants to give them a punishment they won’t forget. She has the Handmaids taken to cages, then chased by aggressive dogs into the abandoned, run-down Fenway Park. In the center are scaffolds, and every Handmaid has a noose put around her neck. The women sob and some even urinate out of fear, but when the levers are pulled, the girls only drop a few inches.

4. Her mood totally changes when it comes to pregnancy.

Twice, Aunt Lydia has had to stop punishing June because she learns that June is pregnant. First, Lydia uses a cattle prod to repeatedly electrocute June after she reveals that she knew Emily was a lesbian. Serena puts an end to the punishment when she screams that she believes June is pregnant. Again, when the Handmaids are being punished for not stoning Janine, June is taken in from the rain and told she does not have to hold a rock when Lydia learns June is with child.

3. Though she cares about babies, she doesn’t care about Handmaids.

Lydia genuinely believes that the Handmaids are only on Earth to serve as vessels to bear children for more deserving parents. The sentiment can be traced back to the time she spent with Ryan and Noelle before Gilead. After June’s failed escape attempt, she is chained in the middle of a gymnasium with just a small bed and a lamp. Lydia tells June she can either go back to the Waterford household or stay there and be executed after giving birth.

2. However, she does think Gilead sometimes goes too far.

Aunt Lydia accompanies June and the Waterford’s when they go to Washington, D.C. to negotiate with Canada for Nichole’s return. While staying at Commander Winslow’s household, June fails to have a conversation with Ofgeorge, who wears a strip of red cloth across her mouth. Aunt Lydia and June are horrified to learn that the cloth is to cover three rings put in the Washington Handmaids’ mouths as a way to keep them silent. June asks Aunt Lydia if she wants all of the girls to be silent, and Lydia admits that she does not.

1. Lydia is still alive… at least for now.

Fans of the series might have hoped that Emily stabbing Lydia would mean an end to everyone’s least favorite Aunt. Unfortunately, she pulled through. The last time audiences see her in the latest season, she is attending the Ceremony at the Lawrence household. The Waterford’s and Winslow’s suggested that Joseph isn’t upholding his duty and trying to have children, so they all go over with Aunt Lydia and a doctor to make sure that the Ceremony actually takes place. Not only is June forced to have sex—it has to be verified afterward. It’s one way to end her season three appearances, and definitely a low note.