The highly determined and rigid Donald Ressler will always follow through on his duties and never let personal emotions get in the way. This Special Agent of the Federal Bureau of Investigation has worked closely with Raymond Reddington, but what secrets is he hiding under that stoic exterior? Despite the showrunners’ attempts to keep character secrets under wraps, we at Nerds & Scoundrels have got you covered. We have compiled a list of ten of the most important facts you should know about this character. Check out the top ten Donald Ressler facts every fan of The Blacklist should know!

Below are ten facts about Donald Ressler, in no particular order.

10. He is portrayed by Diego Klattenhoff.

Canadian actor Diego Klattenhoff has had a versatile and impressive career as an actor. He first gained fame playing the notable Shane Oman in Tina Fey’s Mean Girls in 2004. He went on to earn a handful of roles on TV after that, including on shows like Smallville, Pysch, Supernatural, and Mercy. His first major television role came in 2011 when he was cast in Homeland as Mike Faber. He was nominated for a Screen Actor Guild award along with the rest of his castmates for “Best Cast”, and twice for a PAAFTJ Television Award for “Best Cast in a Drama Series”. He’s also starred in films with famed directors such as J.J. Abrams’ Anatomy of Hope, Guillermo del Toro’s Pacific Rim, and M. Night Shyamalan’s After Earth. He joined the cast of The Blacklist in March 2013. 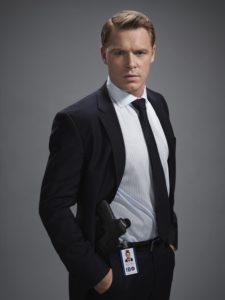 Throughout the course of the series, Ressler has continuously shown contempt for wealthy individuals. He often finds himself being able to relate to Blacklisters who target those people specifically, due to their shared hatred of them. Often times he displays anger and outrage at the wealthiest and most privileged of people when they’re able to escape justice just because of their leverage and resources.

In addition to his dislike for rich and privileged people, Ressler has made it crystal clear throughout his arc on The Blacklist that he has no tolerance for people who disobey the law. He is passionate about justice in all forms and is obsessed with finding the most “just” outcome. His sentiments towards lawfulness have even made him go towards extreme lengths just to achieve rightfulness.

7. He has an indifferent approach to his work.

Despite his devotion to justice, Ressler is a realist. He approaches each assignment and mission with the mentality that no everyone can be saved. He is not the same sort of idealist as Aram. Agent Ressler refuses to let personal feelings and emotions in the way of his tasks, and pursues each job with a single-minded mindest and the sole mentality to right wrongs and achieve fairness for all.

6. His father was a police officer.

Though not much is known about Ressler’s parents, he does reveal to Reven Wright in Season 3, Episode 8 “Kings of the Highway” that his father was a police officer in Detroit Police Department. He was later killed by a drug dealer as part of a trap set up by his corrupt partner, Tommy Markin, after he refused to take bribes. No justice was found after his death, as the police department did not want a trial and did not want to admit their organization was corrupt. This traumatic event incited Ressler’s rampage for fairness and justice in his own work.

5. He used to obsessively pursue Reddington.

Before working with him, Ressler dedicated his career to obsessively stalking and pursuing Reddington. Previously he was involved in a failed FBI assassination attempt towards Reddington in Brussels, Belgium. Despite Ressler’s methodical approach to problem-solving and obsession towards his goal of capturing Reddington, Ressler always found himself a step behind the clever conman.

Once upon a time, Ressler was happily engaged to a woman named Audrey Bidwell. Unfortunately, their relationship fell apart due to Ressler’s obsession with catching Reddington, and they eventually broke up. When Ressler ended up in the hospital after being shot, he tells Reddington about her. Later on, Audrey is killed after being shot by Mako Tanida. After her death, Ressler finds a pregnancy kit among her belongings, hinting that she was pregnant. Audrey’s death led Ressler to finally give up his pursuit of Reddington and join forces with him. Reddington later sends Tanida’s head in a box to Ressler to show that “justice” has been served.

3. He developed a drug addiction.

Ressler developed an addiction to pain medication in the wake of Audrey’s death and the death of Meera Malik, a CIA field agent whom Ressler often worked with. Liz notices his suffering and helps him to overcome his vice by encouraging him to seek help.

2. His reasons for allying with Reddington are complicated.

Despite Reddington’s connection with Audrey’s death, Ressler shouldn’t have any other reason to be joining forces with him. After all, Ressler hates criminal activity – why would he team up with a wanted and known criminal? However, he eventually aligns himself with Reddington, probably due to his prevalent desire to prevent terrible criminal events and to stop the worst blacklisters (terrorists, mass murderers, and ruthless criminals) from winning. Though his views don’t completely align with Reddington’s, the end justifies the means.

With The Blacklist’s tendencies to throw completely unexpected plot twists and turns that often involve characters’ deaths, no one is safe. As of the most recent episode of the show, Season 7, Episode 10 “Katarina Rostova”, Ressler is still alive. But who knows what will happen in the future…? No one can say for sure, but be sure to keep up and follow Nerds & Scoundrels for more Blacklist content!

And that concludes our Donald Ressler Top 10. Did we leave anything out? If so, don’t forget to let us know in the comments! And if you’re dreaming about Ressler and Keen finally getting together, satiate your appetite with our picks of the best Blacklist Fan Fiction.

The Blacklist: 10 Things to Know about Aram Mojtabai