One of the greatest and most compelling characters on television today, Raymond “Red” Reddington from NBC’s The Blacklist is a fascinating human being. This intelligent yet dangerous mastermind goes from the FBI’s #1 Most Wanted Fugitive to suddenly offer to volunteer to help catch criminals. While it can be a lot to keep up with all the clues and details that make up Red’s complicated character, we at Nerds & Scoundrels have compiled a thorough list of all the things you should know about this character. Check out the top ten facts about Raymond Reddington every The Blacklist fan should know!

Below are ten facts about Raymond Reddington, in no particular order.

American actor James Spader has held a long and impressive career as an actor since the 1980s. Most audiences know him from his early portrayals of “eccentric” characters, such as Graham Dalton in Sex, Lies, and Videotape (1989) and Dr. Daniel Jackson in Stargate (1994). He’s also a part of the Marvel Cinematic Universe, having starred as the voice of Ultron in 2015’s Avengers: Age of Ultron. NBC fans also likely remember him from his iconic role as Robert California in the beloved comedy The Office from 2011-2012. The Blacklist is his only current announced project, for which he also stars as one of the shows Executive Producers. 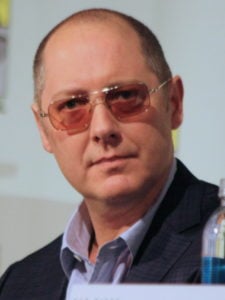 Before becoming the criminal mastermind he is today, Raymond attended the United States Naval Academy. At 24, not only did he complete his matriculation, but he graduated at the top of his class. At the time, he was being groomed to be Admiral, which would have led him to a completely different life than the one he’s leading now! Unfortunately, that plan never came to fruition, as he disappeared while on his way home to his family for Christmas back in 1990. What a different life he might’ve led…

Raymond Reddington’s a pretty popular guy…for all the wrong reasons. Known as “The Concierge of Crime” thanks to his involvement with deal-making in the black market, he earned the number four spot on the FBI Ten Most Wanted Fugitives list, with his spot later rising to number one. He was listed as “arrest on sight” on the list, which audience members were able to see in the “Pilot” episode back in Season 1.

7. He is dedicated to protecting Elizabeth Keene, for reasons that are still unclear.

For reasons that are still not entirely clear, Reddington has dedicated the latter part of his career to protecting Elizabeth Keene. Prior to the events on The Blacklist, Reddington spent 20 years creating a criminal network of spies, thieves, drug traffickers, etc. He later revealed to Kathryn Nemec that this was all for the sole purpose of protecting Liz. He’s even enlisted the help of the FBI to ensure her protection.

6. He was romantically involved with a woman named Josephine Moliere.

Reddington may not talk much about his love life, but that doesn’t mean he hasn’t had one. In 2012, Reddington received a panicked phone call from a woman named Josephine Moliere, who is revealed to be a love interest of his. Her husband, who was a member of the Stockwell crime family, had just found out that she’d been seeing Red behind her back, and started to beat her. Red rushed to her house to save her and killed her husband. Later he learned that the marriage had all been arranged to make the two crime families unite.

5. He has two daughters.

Reddington has two daughters, Elizabeth Keene, and Jennifer Reddington. Elizabeth is the child of Raymond and Katarina Rostova, while Jennifer is the child of Raymond and Naomi Hyland. While Elizabeth is one of the show’s main characters and has been around since Season 1, Jennifer was not properly introduced until her first appearance in Season 5. However, she was briefly mentioned in Season 2. At that time, Red demanded to know where she was while talking with Naomi, her mother.

4. He is the reason that Dembe Zuma is still alive.

Dembe Zuma, Reddington’s stoic bodyguard, has prominent reasons for his loyalty. Reddington found Zuma in 1993. At the time, Dembe was a 14-year-old boy who had been left to die after being chained to a pipe in a basement in a brothel in Nairobi. After taking pity on the young man and freeing him, Reddington helped him build a new life by enrolling him in school and helping him learn many different languages. Without Reddington’s care and guidance, Zuma would likely have died in the gutters all alone.

3. He had plastic surgery done on his face.

Fans were shocked in 2018 when it was revealed that Raymond Reddington was not who he appeared to be. Rather, the man who had claimed to be Reddington for over six seasons was actually Ilya Koslov, a man who assumed the identity of the real Raymond Reddington over 30 years ago. The real Reddington had been killed by Elizabeth Keene back when she was only four years old. Only a few people in “Reddington’s” close circle had been aware of his true identity, including Dembe Zuma and Naomi Hyland, among others. Some, like Ian Garvey, were killed due to this knowledge. However, just when it felt like things were starting to make sense, The Blacklist dropped another bomb on its viewers with another revelation about “Reddington’s” identity…

1. He’s not the real Raymond Reddington.

The Blacklist shocked viewers once again with Season 7, Episode “Katarina Rostova” when Katarina reveals to Liz that Reddington has been lying once again. He is not Ilya Koslov. It was all a lie. Seven seasons in and the audience and the characters still have no idea who Raymond Reddington really is. All we know is that the real Raymond Reddington is dead.  Well, and that the fake Reddington is not actually Ilya Koslov. Who is the impostor Raymond Reddington? Well, no one knows for sure. It appears fans have a lot of different theories. But unfortunately, with The Blacklist currently on hiatus until next year, it looks like we’ll have to keep on guessing in the dark for a bit longer.

And that concludes our Raymond Reddington Top 10. Did we leave anything out? If so, don’t forget to let us know in the comments! What to see another side of Red and the other characters? Check out our rankings for Best Blacklist Fan Fiction.

The Blacklist: Ten Things Every Fan Should Know About Donald Ressler

The Blacklist: 10 Things to Know about Samar Navabi