Much of the excitement on the set of the Season 3 premiere of Critical Role was about something known as rollies. What is rollies, you are probably wondering? We don’t really know, for now. Will that stop us from speculating? No! Keep reading to learn what we know so far about this dice game in our Rollies Critical Role Guide.

What we do know is that Rollies is some kind of dice game developed by the cast. As of the premiere episode, neither Matt Mercer or any of the other cast members has shed any light on what the game is or why it has become such a phenomenon. It does appear to be a simple dice game involving a roll of a d20, however. 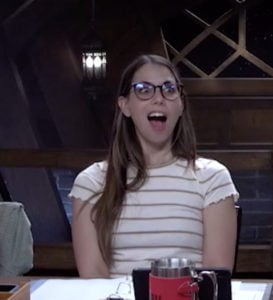 Apparently, everyone. But the sheer excitement that comes from Laura Bailey when anything related to Rollies is mentioned is unmatched! Find someone in your life that loves you as much as Laura Bailey loves Rollies.

That’s it. That’s all we know about Rollies so far. Will this game sweep the nation and usher in a new era of dice game popularity? I guess we’ll find out in a few weeks!.

What is a Hodmedod? | Exandria Unlimited Calamity

Critical Role: What is the Silken Squall?