There are few races more synonymous with fantasy than the race of the Elf. These pretentious old creatures in Dungeons & Dragons 5E are an excellent choice for any adventurer. Lithe, wise survivalists, the Elf has a fairly consistent history and an even more consistent pride. Of all of the old races, these guys are the most traditional and possibly the most stereotypical. So why might a player want to play as one of these ancient men and women? Our Elf 5E guide will help you figure that out!

Elves are legendary for quite a few things. First released in the Player’s Handbook, elves are tall, slender, and graceful. For most elves, every movement is natural and perfect. Their legacy for being feminine is due to the fact that men and women are essentially the same weight, a rarity amongst most races, and even the same height. Elf hair can actually be some incredible colors, like white or green. This is due to their fey origins; Elves have evolved from nature spirits! 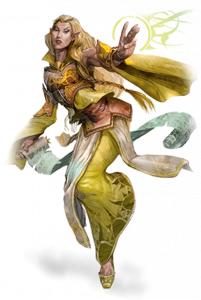 Because of this connection to the Fey, Elves adore nature, music, magic, and all things that Fey enjoy. They are able to hide their homes with gentle magic, though anyone looking for them will find them. Elves are skilled hunters and gatherers, but they have crop patches (rather than farms; elves can use their connection to nature to make crops grow without needing plows).

However, unlike most Fey, Elves often feel the years much harder. With the ability to live for nearly 800 years, Elves take hold of information and have many, many experiences. Even the youngest Elf has somewhat dampened emotions, due to “young” being well over 100 for them.

This age has brought with it Wisdom. Elves know their options; they understand diplomacy’s importance before violence is brought to arms. They are more likely to retreat when needed, using guerilla tactics and their advanced dexterity to avoid direct conflict. However, anyone who fights an elf straight-on will discover just how potent an Elf can be in hand-to-hand combat.

Elves are skilled crafters and artisans, due to the ability to dedicate themselves to something for a human lifetime without growing a tenth of their lifespan. This same idea causes many Elves to strike out on adventure; unwilling to spend 800 years in the same spot, most head out to explore some of the world. Therefore, most Elves learn to adventure in some way; their Fey nature allow them to adapt to many situations.

Elven names are quite expansive, but they normally settle on one upon reaching adulthood. Check out our naming guide if you’re having trouble choosing one.

Elves are deeply interesting and… Oh my goodness, there are so many subclasses!

The Darkness-loving, cave dwelling empire of the Drow are what many nightmares are bred from.

The Eladrin are perhaps the closest to their fey routes, and as such have some latent fey magic.

An alternate option to the Elf Weapon Training class feature, based on Eberron.

An alternate option to the Elf Weapon Training class feature, based on Eberron.

Before you take this archetype, we highly suggest you make sure your DM is good with Dragonmarks.

Rather feylike elves from Wildemount.

Elves… In the water. Who would have thought?

These guys are sworn to the Raven Queen, and thus are stuck between life and death.

These guys are really in-tune with nature. They make for natural druids and rangers, and fight for nature at all costs.

If you’re allowed to play every Elf option in the game, you can play almost every single class perfectly. You just have so many options!

Elves are insane. You have so many race options, your racial traits are fantastic, and your race’s history is quite enticing. If you want to play… most any class, the Elf is a solid pick for you!

Mage Hand vs Unseen Servant 5E | Pros and Cons of Both