Congratulations on killing Kjotve, though his awful son was able to escape. Now, the world is starting to open up just a little more. As such, it’s time to reach Alrekstad. If you’re wanting the smoothest journey through this questline, Nerds and Scoundrels will help you out! Check out our Birthrights walkthrough to get to Alrekstad quickly! 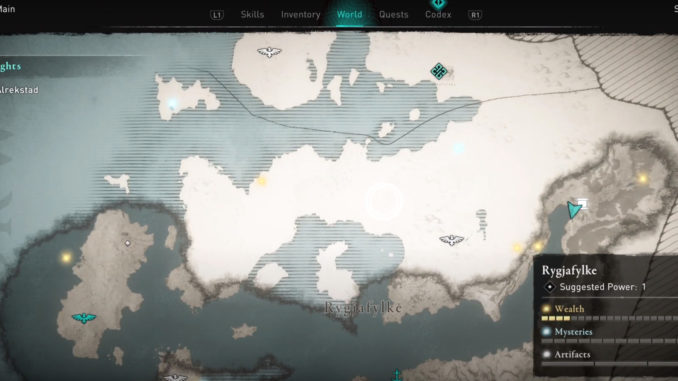 There are two ways to reasonably get to Alrekstad. You can ride horseback for ~1700 meters. This will allow you to explore the map quite a lot, but it’ll take a while. Your horse is no car!

However, Alrekstad is a coastal town. Instead of riding horseback, you could take your boat around the coast of Rygkafylke and there by water. This is just the teeniest bit faster, even though it prevents you from clearing the map on horseback. Do be sure to hit up spots of Wealth, Mysteries, and Artifacts that you see near the coast if you do so! It’s not a bad idea to get as much of that as you can.

Once you reach Alrekstad, you put on a cloak and enter a “Distrust Area”. Try not to look too suspicious! You and Sigurd are not there for any good reason. Thankfully, it seems that you don’t need to try too hard to not be distrustful.

Sigurd is in a nearby building. Use your senses to see the blue light once you get close to the Drinking minigame in the back left of the town.

This mission serves as your Distrust tutorial. If you want to listen in on information, you’ll have to be subtle. Basim will lead you through everything you might want to do; follow him and then try not to bump into anyone who looks at your face.

If you’re worried about being seen, crouch in the nearby tall grass until people can’t possibly look at your face, and then walk through the door.

Once you finish your little brawl, head to Sigurd. You still need to play it safe, but the guards will move on their patrol as long as they aren’t looking directly at you. Keep your face hidden and sprint in when the guards aren’t likely to see your face.

During the following cutscene, you can choose to kill or banish Gorm, based on King Harold’s whim. This dialogue has absolutely no bearing on the game. Harold will banish him no matter what. It seems that the game has plans for him, hmm?

And that ends your cloak tutorial! Hopefully, you found this mechanic as interesting as we did; hiding your face from enemies is going to become a bit of a theme. If you gathered the wealth of the town, then you might have found this tutorial fairly tricky! If you have any other questions about Valhalla’s quests, check us out for more guides on this pretty sweet game!