The strange things that are found in the Feywild are as enticing as they are dreadful. In Wild Beyond the Witchlight, some of those magic items have come to life and can be brought back. This terrifying realm of possibilities should excite adventurers, who may come to the Witchlight simply for the opportunity to explore… But, be warned! There is just as much evil as there is good in the Wild. Our Wild Beyond the Witchlight 5E Magic Items guide will go over everything that’s brand new to the system.

All New Wild Beyond the Witchlight Magic Items

There are 13 brand new magical items that have been canonically introduced into the system. These items range from new weapons to vehicles and even cauldrons! There are a select few interesting choices here.

This cute little thing is actually a vehicle! By giving it verbal commands, it can walk, fly, or swim by 20 feet per round. It even has the ability to hover! 20 feet speed is only if it’s carrying 300 pounds of weight or less. Otherwise, it moves 10 feet per round.

This is an adorable vehicle for a single person. But, with Attunement requirements and it’s exceptionally slow speed, it might not be worth the slot. Super fun, though!

The Chromatic Rose is a defensive consumable item. While holding it, you gain resistance to a specific elemental type, based on the rose;

If you take 10 or more damage from a single attack of the rose’s type while holding the rose, the rose withers and negates the damage instead. In addition, as an action, you can destroy the robe to deal 3d10 damage of the rose’s type in a 20 foot cone.

Considering this item doesn’t have attunement, this is a very valid option in preparation of fighting a specific opponent. A Red Dragon is countered very well with a red rose! That damage negation basically removes a round from the Dragon’s combat. And the emergency cone can come in handy… Though it will feel like a minor waste of the Rose’s potential.

This consumable magical item decimates metal! As an action, a 10-foot cube nearby instantly destroys ferrous metal. Any creature that has metal within them must make a DC 13 save or take 4d8 necrotic damage.

This is a very niche utility item, but blasting through a nonmagical metal can be exceptionally handy. Hinges made of metal disappear, doors themselves can melt easily, and constructs will take a fair chunk of damage from this. It’s not something to dig for in every situation, but having a little packet won’t hurt you.

This +1 Quarterstaff holds a shocking surprise! The staff has 10 charges; when landing a melee hit with the staff, you may spend up to 3 charges. Each charge you spend deals 1d8 extra damage. Alternatively, you can spend 3 charges and an action to teleport 60 feet and turn invisible until the start of your next turn.

This staff is rather potent. It has a great escape option and decent burst damage. Anyone can make use of Eldritch Escape, as long as they have a hand free. Eldritch Attack might be a touch too niche for most classes to make use of in their traditional inventory, but it’s fun nonetheless. 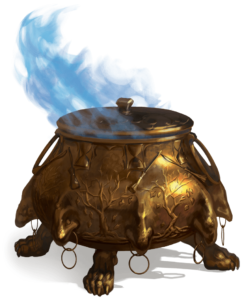 This is a horrifying, coven-binding cauldron that should never see the day. Attuning to the Cauldron, if Humanoid, may cause aging to the point of decrepitude; causing death in a mere 3d8 days.

Hags have a much easier time attuning, and the cauldron has 2 forms that it uses. The Gold Cauldron may provide food, buffs, and scrying, as well as creating a Broom of Flying, depending on what goes in. The Iron Cauldron may summon a Swarm of Bats, knock humanoids unconscious, create a Wand of Polymorph, or freeze everyone within 1,000 feet of the cauldron in time itself. The Cauldron is powerful, but it can be destroyed by Flame Tongue or Frost Brand weapons. Destroying this Cauldron also significantly debuffs all hags in the multiverse.

This is a campaign-defining magical item, and should be taken seriously. However, this is rarely an item that a party can use; the Attunement itself is so risky that it might not be worth considering. For Non-Humanoids and Hags, getting your hands on this thing will be a goldmine, and immensely useful.

Now we have some movement! As long as you’re not over 300 pounds, riding this vehicle causes you to fly 30 feet per round. You’re not able to hover, and if it crashes, it has to spend 1d6+4 days recovering.

This is one of the few items in the game that gives a use access to Flight without Attunement or spending a spell slot. That alone makes it useful, but it comes at a price of being incredibly awkward to use. For ranged characters and spellcasters, flying around on this thing while tossing spells into the distance would be actually very fun. Melee characters should stay far away.

This consumable lets a single person within reach fly 30 feet for 1 minute. They can even hover. They are also guaranteed a safe landing.

Pocket-flight is incredibly useful. Instead of spending a spell slot, you just use a bit of pixie dust. Perfect for emergencies, chasing down an annoying enemy that you didn’t see coming, or allowing a person who didn’t invest in flight a moment in the sun. This is a must-find item for characters not grabbing Winged Boots.

What an impressive potion! Advantageous, even. This gives you advantage on a single d20 roll for 1 hour. Once you use the advantage, the potion’s effect ends.

This potion is perfect for preparing for a hard fight. Being able to choose Advantage at some point in the next hour is guaranteed to come in handy. This essentially gives you the chance to say “I reroll that” during a dungeon or hard fight. Put this on your primary damage dealer or high-priority caster to ensure they can stay safe.

This is an incredibly weird magical item. You steal someone’s shadow, who is within range of you. The shadow stays still, unless you use a bonus action to force it to move. While you are in control of it, it deals no damage, cannot be harmed, and requires no luxuries or items to stay alive. Alternatively, you can use a Bonus Action to let it wreak havoc. This turns it into a Shadow, but a Fey instead of Undead. It does not kill, instead knocking people unconscious. The creature whose shadow you stole must either get cured from a Curse (such as with Remove Curse), or the Shadow needs to die, for the creature to regain their shadow. Removing the curse from the target also kills the shadow.

Strange! You can send a shadow into a room of enemies to weaken them before a fight; Strength damage is very scary, after all! And if your party doesn’t mind losing their shadow for a bit, you can send an army of shadows after a particular target. They might not be the most threatening in the world… But who knows? They might accidentally turn the final boss into a 1 Strength moron. 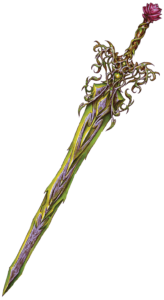 This +3 Legendary Greatsword can only be attuned by a non-evil character. It ignores Slashing Resistance, it has the Vorpal quality, and you can use Charisma instead of Strength for attack and damage rolls. The Sword is intelligent, however, and wants you to slay evil dragons. If you miss 3 times in a row, it will end it’s attunement to you. Reattuning means you have to force your will onto it to prove yourself to the weapon.

This might be the best Greatsword in the game. It has so many upsides! Charisma to attack and damage is nice, but doesn’t really come into play; most Greatsword Wielders will have their Strength be higher than any other statistic. The trait where it’ll unattune to you if you miss too often is hilarious, and shouldn’t come into play that often; it’s hard to miss too many times in a row in 5E!

This +2 Longsword only allows itself to be attuned to Good creatures. That’s because you can cast Revivify from it once per day! It’s a bit of a worrywort, but it doesn’t take insults lightly, and will always insist that you stay in a fight if you are feeling good.

This is a pretty basic weapon, but it can allow your Fighter or Paladin to have an option to Revive someone. Besides, there’s something awesome about a sword that worries about you… But also wants nothing more than to fight. Weird combination! But it’ll lead to some hilarious RP moments.

This +1 Greataxe comes with a particular anger against plants. Against Plants, Plant-type creatures, and Wooden objects, it deals 2d6 slashing damage in addition to the attack’s damage.

Super basic anti-plant weapon. Nothing too special! Bring it if you need to clear out particularly unruly vegetation. It works better than most +3 weapons in that case… Unless you like the bonus accuracy. Which is a reasonable trade-off!

The magic items in this guide aren’t extremely powerful. We have great Consumable items and some interesting vehicles, but very few defensive items or permanent weapons. Still, this book has a good handful of items to make your adventure more interesting.