How many times have you sat down to play a game of Dungeons & Dragons or Pathfinder or any other RPG on Roll20? How many times have you rolled the same attack roll, or casted the same spell, or rolled initiative? Are you tired of always needing to manually put in the command every single time? Well, thankfully, Roll20 has a system to auto-roll things just for you! If you’re wanting to make your own macros, our Roll20 Macro guide is the perfect place to start!

A Macro is designed to be a button on the bottom of your screen that you can click to automatically enter a chat message. For instance, let’s say I’m playing a Greatsword Fighter. I make the attack roll all of the time, but I don’t like using the Character Sheet. The Macro will let me roll an attack roll or a damage roll without needing to enter anything into the chat.

How to Make a Macro

To make a Macro, head to the fourth or fifth tab on the chat log of your Roll20 campaign; the tab has a bulleted list icon.

When in this tab, click on the “+ Add” option to the right of the “Macros” section. This will open up a small log for you. 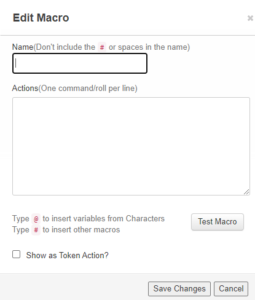 Name the Macro something you will be able to recognize, like “Initiative” or “GreatswordAttack”. Then, in the small box below, you can enter something you’d write in a chatlog. For instance, if I wanted to roll a Greatsword Attack, I would put in “/roll d20+5” into the “Actions” box. You can click “Test Macro” to see if it worked.

Once you are done with the action, you can “Save Changes” and it will now show up as a list under your Macros tab. 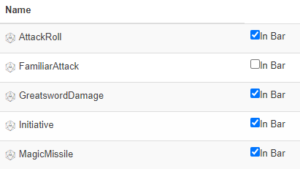 If you want to be able to click on your macros at any time, select the “In Bar” option. That will put your actions at the bottom of the screen, where they will be able to be interacted with.

Are you wanting to become an expert macro user, and looking for some advice? There’s a ton of stuff to do with Roll20, so we can’t explain it all here! We’ll go through some of the most useful commands that you can put in a macro!

If you want to roll many times in the same macro, you’re going to want to use brackets because you can roll them all at once. Instead of using /roll, you can simply put [[ and ]] around a dice roll. This will allow the program to roll the dice without needing the /roll command! This can make things a lot easier for your macro.

For example, my Wizard casts Magic Missile a lot, and I want to show all 3 missiles at the same time. I could roll 3d4+3 and do the math, but that can be a bit troublesome with overlapping damage. Instead, in our macro (or in the Roll20 chat), we can put this instead;

When we use the macro, the chat should look like this;

You can use these brackets with any roll command, but that’s not all! This is a great way to give exact XP or divide gold, since all math and dice rolls work in these brackets. If, for example, we want to split 4304 gp six ways, we can put [[4304/6]] in the brackets and see what we get!

If you want to really improve your use of Roll20, these brackets are a great start!

If you want to reroll dice, you have quite a few options! Here are some of the most useful macros to add;

These rerolls are automatic. So, if you’re a Champion Fighter, you can make your attack rolls crit on a 19+. Or, if you’re a Great Weapon Paladin, you can reroll your 1 and 2 once on the damage roll.

Want to add some flavor to your rolls? You can “emote” during your Macros; it’s not all about the rolls! You can even emote and roll!

Try this out; we’re going to brag before rolling Greatsword damage. So, all we need to do is make sure each command is on a different line! 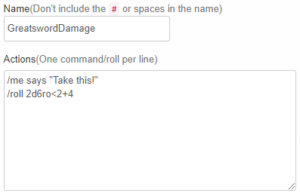 “/me” starts the line of dialogue with a unique border and messaging style. To change what character is saying the message, click on the drop-down menu underneath the Chat box. 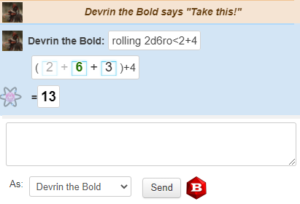 And that’s all we’ll go over for now! There are a ton of options that roll20 offers that we haven’t gone over! If you have any questions, please leave a comment or head to the Wiki for more options to use with your macros!