Dragons are the heart and soul of magic within Dungeons & Dragons 5th Edition. Fizban’s Treasury of Dragons will finally allow non-Sorcerers to accept the power into their bodies! The Discipline of the Ascendant Dragon has added the creatures’ power to the Monk’s arsenal. With immense elemental power, the Ascendant Dragon uses draconic abilities to improve the Monk’s utility. And wow, depending on the situation, this Monk can decimate combat encounters. Our Way of the Ascendant Dragon 5E guide will tell you the benefits and downsides of playing this class.

The Ascendant Dragon is a very potent archetype in the right hands. It has the ability to spread mass Damage Resistance, deals decent Area of Effect damage, and is fantastic at hunting down damage vulnerabilities. However, the area of effect damage and damage resistance aura are both very limited. If you want to play with the Monk’s Flurry of Blows and Stunning Fist, this archetype might be overly demanding. But, if you can manage your resources and plan around your enemies, this could be one of the better Monk subclasses for you.

To start, you get two utility effects and one legitimately powerful effect.

Our first minor piece of utility are reaction-rerolls of Intimidation and Persuasion checks. You are basically using the presence of a dragon to try and convince the target that you are more interactive than you seem. Unfortunately, this reaction can only be used until it works; once your reroll is a success, you’re done.

Pretty solid, honestly. While the Monk should not be in social gatherings, the ability to have pseudo-advantage on most Charisma checks will make you a hit at parties. You’re not going to be good at talking to people, but this’ll give you a fighting chance. And the limitation is honestly not bad! You probably shouldn’t make more than a couple of Talking checks per day. It even stacks with Advantage! Interesting start, though it doesn’t help you in a fight.

Neither does learning Draconic, your second piece of minor utility. While Draconic is by far and away one of the best languages that you can learn, you’re not going to be the one reading it very often. If your party has no other source of Draconic, then this is alright until Comprehend Languages comes along.

Finally, Draconic Strike. Now this is neat! Instead of Bludgeoning Damage, you can do a type of elemental damage – acid, cold, fire, lightning, or poison. And you get to choose every single time you damage a target! With no limitations!

Normally, this means exceptionally little. It almost always doesn’t matter what you choose, because damage types are only here to navigate around immunities, resistances, and weaknesses. But, once you know a creature’s weakness, then this ability gets crazy! You can get double damage Monk Flurries without spending a single resource! Alternatively, you can beat the crap out of swarms and other physically resistant creatures.

As a side-note, these still count as physical attacks. You’re still punching the target. Against effects that deal damage to targets using unarmed strikes or melee attacks, you’re still getting affected. But, trust me; this is actually a really good reason to play as this archetype. And it’s not even all you get at level 3!

Breath of the Dragon

What would a Dragon archetype be without the ability to spit out some energy? As an Attack, you can exhale a small, 20 ft. cone or decent, 30 ft. line of acid, cold, fire, lightning, or poison damage. Against your Ki DC, the creatures make a Dexterity save, taking 2 Martial Arts dice of damage on a failure (half as much on a success). This upgrades to 3 dice at level 11. You can use this for free a number of times equal to your proficiency bonus per day. After that number, it costs 2 Ki Points.

Monks are historically weak against multiple creatures. They prefer to hammer a single target. And with the use of this ability… They will remain weak against multiple creatures. 2 Martial Arts dice is puny until you get to d6s and d8s. Even then, your punches are primarily carried by your Dexterity modifier. This is a pitiful addition to your damage.

However, if you’re against a massive pile of exceptionally weak enemies, this is obviously better than nothing! Rather than uselessly pounding away at one target at a time, your fiery sneeze can hit a surprising number of enemies. And even at its worst use, you can still try to snipe an enemy 30 feet away from you for 3 dice. That’s not that bad!

Is it worth 2 ki points? Only if you can hit 3 or more enemies. 2 Ki can be used to punch 2 more times (with 2 flurry of blows). And a punch is better than a single roll of Breath of the Dragon. Play it safe with this class feature, and use it wisely. It isn’t strictly better than a punch.

This feature is really, really limited. Step of the Wind already costs a Ki point, and you’d realistically only use it in emergencies. This flight is, therefore, an emergency feature. You can’t really contend with flying enemies (unless you can grapple them, which the Monk has trouble doing). You can’t really chase down enemies either, since you only have one round of flight.

The good news is that your Flight speed is pretty exceptional. It’s equal to your walking speed, which means you can get 60 feet of flight. If you Dashed, that means you’re flying at 120 feet per round! That’s awesome!

But you still need Winged Boots. Winged Boots will let you fly for much, much longer, and won’t require you to spend 1 Ki Point per round to stay in the air. Once you get Winged Boots, then you no longer need this feature; it’s useless to you.

So, this feature will let you give other people your flight speed for a while… But please don’t think this can replace a more permanent flight option. This feature is far too limited and expensive to be your sole source of flying.

Aspect of the Wyrm

This is by far the most important ability that you can get as a Dragon Ascendant. Arguably, this is the best feature that a Monk can get! As a bonus action, you gain a 10 ft aura for 1 minute. This aura is either:

This aura is free once per day. Otherwise, it costs 3 Ki Points to create.

Let’s talk about the downsides of this feature, because there aren’t many. Frightening Presence costs a Bonus Action each turn, which means you can’t use Martial Arts or Flurry of Blows to deal damage. And it’s not guaranteed to grant you 1 minute of fear per bonus action. The aura is also tiny. It’ll only really help for allies within range of you. And since you’re a monk, “allies within range” are going to be your fellow melee combatants.

But, good lord, this is versatile and brutal! Sure, you’re leaving damage on the table by spending Bonus Actions to Frighten people. But Frightened is a brutal condition that can force a creature into a stand-still position. If you need a target out of melee range while putting disadvantage on everything they know and love, a bonus action to do so is worthwhile!

Resistance is the real winner here. Being able to spend a Bonus Action to counter acid, cold, fire, lightning, and poison? That’s… pretty wild! You’re a great Dragon Hunter, and most creatures are going to have trouble casting against you. Since you can choose any option on the table anytime you cast this aura, you’ll always be spending your ability correctly. The only limitation is your Initiative! And it lasts long enough to prepare outside of combat, so that’s not even an issue!

This is a great class feature for defending your nearby allies from a Dragon’s wrath, and from most casters. It won’t stop everything, but holy crap if it isn’t potent in the situations where it works!

Time for some upgrades!

Augment Breath is a bit expensive, but useful. 4d10 damage is somewhat respectable; 22 average damage is nothing to sneeze at. And with a 60 ft cone (or 90 ft line) to work with, you’re going to cover a room! You’re still spending 1 ki (or 3 ki, if you need to span this), so make sure you’re using this carefully. At this point, this ability might deal a bit more damage than punching your enemy in the face… as long as you don’t roll all 1s. Luck of the dice! It took 14 levels, but you finally have a very respectable Area of Effect that you can spam relatively easily.

Blindsight is a fun ability, but your close range is somewhat restrictive. Still, this is a resourceless anti-invisibility effect if you’re good at guessing. And you can fight people within magical darkness or fog extremely easily. This is good for late-game combat strategies!

Finally, you can explode into an element of your choice. Just in case resistance to your choice of element wasn’t quite good enough! You get to choose your damage type (acid, cold, fire, lightning, or poison) even if you chose a different one for resistance. Perfect!  The limited range of the aura rears its ugly head, but this damage is great against large swarms of weak enemies. And it’s still 3d10 damage as a bonus action with either Frightened or a great buff!

Overall, level 17 is fine. It’s nothing special, and if you want to multiclass a lot, level 11 is by far the most important level. But, as a full monk, 4d10 area of effects, 3d10 bonus actions with buffs attached, and anti-invisibility is solid as heck! 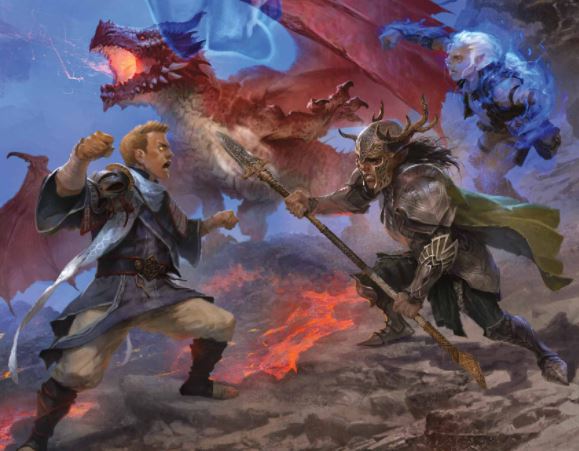 The Ascendant Dragon Monk is looking for Dexterity and Wisdom boosts. Wisdom is especially important, as it determines your DC for Dragon Breath and Frightful Presence. Races that can effectively approach targets and move around the battlefield are especially handy.

For the purposes of this guide, we are going to assume you are using the Race’s base statistics, rather than the optional race creation feature from Tasha’s Cauldron.

Shifters make for great Monks, and the Wildhunt works great here. You start with +2 Wisdom and +1 Dexterity, which is fine; not perfect, since you’d rather have that +2 in Dexterity, but whatever. As a bonus action, you can set up for a fight, getting a ton of temporary hitpoints and getting advantage on Wisdom checks. That lets you search for people easier who might be hiding from your Blindsight. Great choice, though a bit expensive for your Bonus Actions.

The Aarakocra is a great choice. Permanent flight smokes your level 6 ability, but the ability to more accurately aim your breath attacks while getting into fights will help you a lot. If you can change your Ability Scores, the Bugbear is great; the Lunge ability lets you position your Aura easier, and you get some good skills, including Surprise Attack.

Conclusion – Our Take on the Ascendant Dragon

The Ascendant Dragon has the potential to be one of the strongest Ways that a Monk has access to. But, it requires a disciplined player and specific circumstances to reach its potential. And with a weak level 6 ability, it’ll take a while for the Monk to feel as powerful as it deserves to be. Stay with it, though, and you’ll be fine!

Harengon 5E: Rabbitfolk from Wild Beyond the Witchlight