We like cleaving stuff in two with a giant two-handed sword as much as the next guy. But sometimes it’s nice to have a weapon that leaves a spare hand free. Shields come in handy, and it’s always fun to go into battle with a sword in one hand and a spell in another. No matter what you fancy (unless you have your heart set on the best bow in Skyrim), having the best one handed weapon in Skyrim is never a bad thing. Check out this Nerds and Scoundrels Top 10 below to find the best one handed weapon in Skyrim.

Please note that for the sake of consistency, this list does not include any craftable weapons. There are a number of items like Daedra and Dragonbone weapons that are excellent, especially when upgraded and enchanted. If you decide a real weapon requires both hands, check out our Skyrim Best Two-Handed Weapon Top 10!

Ok, so we’re starting the list with a bit of a curveball. Coming in at #10 is the combination of Bloodscythe and Soulrender. Yes, technically these are two one handed weapons. But the reality is they are both excellent so long as you equip them together. When used separately, each sword is fairly standard. But when wielded together they have an enchantment that absorbs 15 health and magicka with each strike. Whats’ more, there is a chance to weaken armor and magical defenses as well. Bonus tip: add a set of Deathbrand armor for a damage bonus! This is a fantastic weapon, but it is very situational. Harkon’s sword absorbs 15 health, magicka, AND stamina. The drawback? You only get the bonuses if you are a vampire. If sucking blood is your thing, this sword would rocket up to the top of this list. But it’s extremely situational nature puts it here at #9 for us.

With a name like Dragonbane, does it shock you to learn this weapon has bonused against dragons? Didn’t think so. This weapon does additional shock damage when used against dragons, but it differs from other enchantments as this is not technically magicka damage. Outside of using this against dragons, it’s a fine but not outstanding weapon. It’s worth noting it has unusual leveling like the Nightingale Blade. The permanent level of Dragonbane depends on your level at the time you enter the Sky Haven Temple for the first time. You must be level 46 at the time of entry to max out Dragonbane. 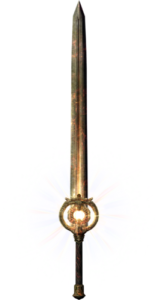 Gifted to you by the Daedric Prince Meridia upon the completion of the quest “The Break of Dawn,” Dawnbreaker is a decent sword that deals 12 base damage on its own. However, it has a unique enchantment known as Meridia’sRetiribution. This enchantment “infects” a target for ten seconds each time it is struck. The target takes burning damage during the course of that ten seconds. If the burning damage kills the target it will explode, destroying nearby undead. How useful this weapon is depends on how frequently you are battling with the undead.

Chillrend looks like your typical glass sword, but it has a blue hue to it as opposed to green. It also gives off a vapor and hisses as if it were extremely cold. You can find the blade in the tunnels under Riftweald Manor in Riften. Chillrend paralyzes a target for 2 seconds and deals a large amount of frost damage depending on your Augmented Frost perk. Much like Dragonbane, Chillrend is levelled depending on your level when you first enter Riftweald Manor. The blade will reach its full potential if you wait until level 46.

The only mace to make our list, the Mace of Molag Bal is one of the coolest looking maces in Skyrim. This unique mace can be had after completing the quest House of Horrors. The Mace of Molag Bal starts out as rusty mace, but it transforms into a unique daedric weapon after you place it on the Altar of Molag Bal. The mace has great damage and much better swing speed than other maces, making it almost function like a sword. On top of the base damage, it also deals 25 damage to stamina and magicka with each hit. If that wasn’t enough, it has a built-in enchantment that functions like soul trap, meaning you will fill a soul gem when you strike a killing blow with the Mace of Molag Bal.

The only dagger to make our list, Mehrunes’ Razor is the exception to the rule that daggers aren’t that great in Skyrim. This weapon has a variety of nicknames including The Dagger of the Final Wounds,  Bane of the Righteous, and Kingslayer. The big draw of Mehrunes’ Razor is its unique ability: a 1.98% chance to instantly kill almost any opponent.

The unique sword with the highest base damage of any one handed weapon in the game, Miraak’s Sword is also the second lightest sword. This bizarre looking sword appears to elongate when swung. If the base stats of the sword weren’t great enough, it also absorbs 15 points of stamina thanks to its enchantment. All in all, a great sword with no drawbacks.

Finally, our choice for Skyrim Best One Handed Weapon is the Windshear. A unique scimitar, this weapon can be obtained during the Dark Brotherhood quest “Hail Sithis!” While the damage isn’t necessarily worth writing home about, Windshear does have one special bonus that really sets it apart. That bonus is an increased chance of your sword knocking your opponent down. It lands nearly half the time, make it a great crowd control weapon.

And there you have it: our Top Ten Skyrim Best One Handed Weapon Guide. Agree? Disagree? Let us know in the comment section below. Want someone by your side through thick and thin? Check out our guide to the Best Wives in Skyrim.