The Mythic Odysseys of Theros are home to a wide variety of fey creatures, from the mischievous Satyr to the curious Centaur. If you’re looking for an option that would make any creature in your reach faint in fear, then look no further; the Minotaur 5E Guide has just the creature for you.

The Minotaurs first appeared in the Guildmaster’s Guide to Ravnica as a playable race, and haven’t changed much. The Minotaur’s role in Theros is much different than in Ravnica, though, so read on to find out what their history is for any Theros campaign.

The Minotaur is a solid melee fighter; both your abilities and your traits complement this.

Alignment. Tends towards Lawful, though you may lean Chaotic the farther outside of the walls of Skophos you get.

Size. Over 6 and stocky, but you’re still Medium.

Goring Rush. After a Dash action, and at least 20 ft of movement, you can make one horn attack as a bonus action.

Hammering Horns. After you attack something one size larger than you or smaller, you can use a Bonus action. That forces it to make a Strength save (based on your Strength mod) or be pushed 10 ft away.

Imposing Presence. You get automatic proficiency in Intimidation or Persuasion.

Minotaurs are split in twain. Some dwell in the badlands of Phoberos, others within the remote polis of Skophos. Within these walls, and amongst those wandering Phoberos they follow the dark god Mogis, who has led them on a trail of slaughter. Those who escaped his tyrannical hand are free to journey the world.

If you were born within the walls, you are at least accustomed to the name Mogis. He has ruled you for generations. You have watched family members fight and die with those peoples of Arkos and those nearby Phoberos. Your kingdom, Skophos, is the dark reflection of the bastion of Akros. Phoberos is the eternal battleground of your people.

Within the walls of Skophos is a massive maze – a la Greek legends – is a tribe of minotaurs that value religious zealotry and prowess in battle.

Those who toss aside their troubled history are actually welcomed into communities such as Meletis, Setessa, and even Oreskos. Stories of minotaur heroes lead to welcome arms… To groups of non-minotaurs with a single minotaur in the midst.

While Minotaur ancestry is full of blood and strife, that doesn’t mean you are! You are a passionate soul, both in love and war. You laugh at your friend’s jokes, but vent your outrage through violence. Maybe you also might have some religion left in your heart; you were raised religious, after all, so you might worship Iroas, Mogis’s hated twin brother, or another god of your choosing.

If you are a Mogis worshipping Skophan, your hatred of Akros likely perforates your personality. You’ve probably had propaganda of humans and other fey drilled into your head, and are unlikely to forgive them easily. Your religious zeal can only be matched by your want for community… A valid reason to join an adventuring party.

The Minotaur’s +2 to Strength makes it an easy choice for the myriad of melee combatants in 5E.

What a glorious contribution to our cause! With the release of the Glory Paladin, you might want to consider being one. You’d not only get your awesome stats, nor some great utility with your natural attack. You’d also get a face skill for free, and the fantastic flavor of being a Paladin of Migos! What an interesting choice for a Lawful Evil build.

One of the problems with melee Fighter is mobility. The Dash action is pretty good for moving around, but leaves you without actions. Now, you can use Goring Rush to at least deal a tiny bit of damage. And then you’re in a great position to use Hammering Horns as great combat control… and that +2 Strength to make it’s hitpoints go down real quick.

The Minotaur doesn’t change much with this guide; they’re still stuck in a maze, still doing evil stuff. However, the flavor of the Minotaur Theros race offers an easy escape for an adventurous minotaur to become a legend, which is wonderful. In terms of dangerous melee combatants (that might not benefit too much from spellcasting!), you couldn’t get much better than this. 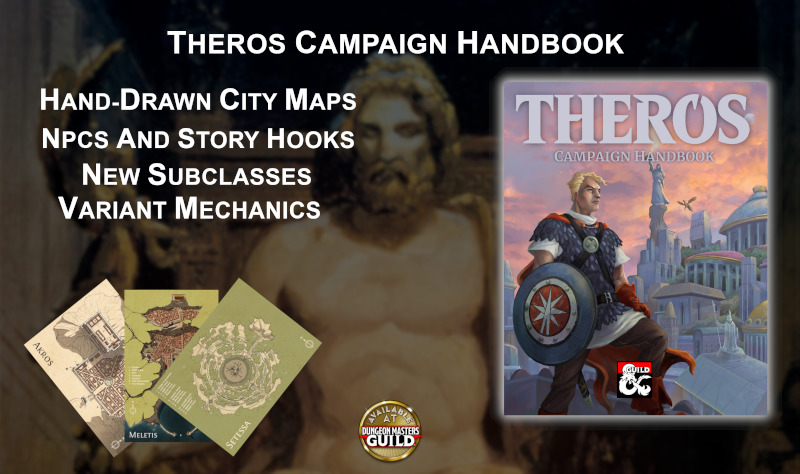 Get it at DmsGuild!