God Eater, like Monster Hunter, has a lot of different weapon types for you to try and find the perfect one that suits you. With God Eater, the weapon is the primary source of skills and abilities; the armor does nothing. That is where the main difference between the two titles differ. Our God Eater 3 Weapons Guide can walk you through your options.

Weapon skills have appeared in a few Monster Hunter games, such as Monster Hunter 4 Ultimate, but it’s not a main staple of the series. But once again, God Eater has an array of different abilities for every weapon type, called Burst Arts.

The weapons that users wield in God Eater are known as God Arcs. These are extraordinary weapons, as each one has the ability to form into three weapons, a blade, a gun, and a shield. So depending on what Arigami you are facing, you can quickly change between being up close and personal, or decide to hang back and attack from range.

There are eight different weapon types.

The Charge Spear a piercing damage type weapon, and is perfect for users who like to pinpoint the enemy’s weakness and only aim for those areas. Users have access to a backflip, great for escaping attacks, and then for getting back into the fray.

Users of this Spear also have access to a Charge Glide attack, which allows you to enter Open Mode.

In Open Mode, all attacks have increased range by 25% as well as increased damage. However, it’s only for experienced users, as the effect ends after a certain duration or not chaining attacks together correctly.

The Spear has incredibly good range, so it’s great for positioning, for hit and run tactics. It’s the only pierce-only weapon in the game. Backflip is excellent for dodging danger. And the Burst Art selection is great.

However, getting to grip with the Charge Spear is pretty tricky. Using Open Mode to the best of its ability takes practice. And to maximize the damage potential means that Open Mode has to be used flawlessly.

The Biting Edge is a set of dual blades, that can also be combined into a double-bladed Glaive. The Biting Edge has a Glaive Mode, where it’s weapon attack speed and range increase massively but at the cost of being able to guard, regain stamina or even devour.

You can also go into an Extended Glaive Mode, which increases range and damage again, but this needs a certain amount of attacks in regular Glaive Mode to enter.

The Biting Edge has the fastest attack speed out of all the weapons. And by utilizing this speed, Arigami can be stunned locked, when attacking weakpoints. This weapon deals both slash and piercing type damage.

However, it’s range is pretty abysmal, even in Glaive Mode. For new players, getting used to the stamina depletion is incredibly hard, and it takes a while to come accustomed to using this weapon.

The Boost Hammer is perfect for users who love to be up close and personal with whatever they are facing. It’s a fast attacking, hard-hitting weapon. The Boost Mode of the Hammer is incredibly powerful and allows the wielder to perform a relentless barrage of attacks, causing massive damage.

The Booster Hammer for its size hits fast and still does substantial damage. Like the Charge Spear, its the only weapon to cause Crushing damage. And the strong choice of Burst Arts causes severe damage.

However, the range of the Hammer is poor, and it can be very stamina hungry. It’s a straightforward weapon to master. 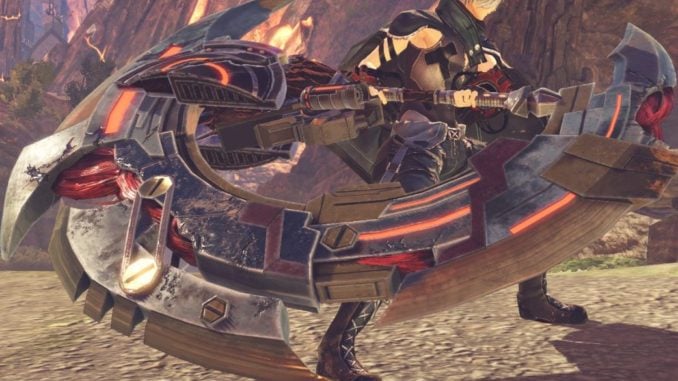 This moon-shaped weapon can transform into between a Chainsaw and a Battleaxe. The Heavy Moon has a Moon Axe Form that allows it to attack with vicious attacks, very much like the Boost Mode from the Boost Hammer.

However, it has another form called Raging Moon, that transforms the weapon into that of a Chainsaw and after a long charge, unleashes a heavy multi-hitting attack.

The Heavy Moon has good damage, and it’s easy to use. Moon Axe form does not drain stamina, which is fantastic.

The range is pretty terrible, for being a massive Battleaxe, and it’s wind up Chainsaw attack Raging Moon us hard to hit efficiently.

The Buster Blade is one of the most damaging weapons in the game; however, the trade-off is its slow attack speed. This weapon greatly resembles the Charge Blade from Monster Hunter, not in its looks, but in the ability to block attacks when attacking.

But this weapon can parry when the Charge Blade can not. The Buster Blade has an incredibly powerful move called the Charge Crush; however, it takes time to charge but, in return, causes massive damage, but that’s if you can land the hit.

The Buster Blade hits like a truck and has a long-range. The selection of Burst Arts is fantastic, as a few can increase attack speed.

It’s slow at attacking, its a weapon that requires patience and is not easy to master. It can parry, but it’ll take a lot of perseverance to get the timing perfect.

The Long Blade is the best all-round weapon for those who want a balance of everything. Its main usage is it’s Zero Stance, that restores stamina, so you can instantly go onto the offensive as quickly as possible.

This is the perfect weapon to use when you want to learn the mechanics of the game. And undecided what weapon you want to wield finally.

The Long Blade is an easy to use weapon. It’s perfect for any situation. Though it might not be the best, it’s still easily usable. It’s Zero Stance gives wielders an ability to go full on the offensive.

As it’s an all-round weapon, it doesn’t excel at anything. It’s good but not great. The Long Blade’s overall damage is weaker compared to other single damage type weapons.

The Short Blade is the only weapon in the entirety of God Eater that is used with one hand. This weapon specialty is its aerial combat, for which it excels at over any other weapon. It might be the weakest in terms of damage, but that does not, by any means, make it an ineffective weapon. It has a good selection of Burst Arts, for use in a lot of situations.

It’s the second quickest weapon in the game, only beaten by the Biting Edge. The Short Blades aerial combat is unmatched.

Its range is pathetic, and it’s not strong enough to significantly damage Arigama’s weak parts. And for those who hate aerial combat, this weapon is not for you.

The Variant Scythe is perfect for those who adore long-range combat, as well as causing damage in a wide range. However, this weapon is for causing damage to all parts of the Arigami, not to one part specifically.

Its range is sublime, easily the best range out of all weapons in the game. It has a quick learning curve, so perfect for newcomers, and it does reasonably decent damage in its broad attack patterns.

When it comes to God Eater 3 weapons, few have the stamina requirements of a Variant Scythe. Extended Bite Mode is extremely stamina hungry, so keep a close eye on your stamina. The Scythe cannot target individual Arigma parts, but it can damage a lot of parts all at once.