Have you been looking for some much-needed freshening of the Dragonborn race in the 5th Edition of D&D? You’re not alone. Thanks to the most recent release from Wizards of the Coast, we have two excellent Dragonborn variants to play with. Keep reading our Draconblood Dragonborn 5E Guide to learn about one of our favorites! 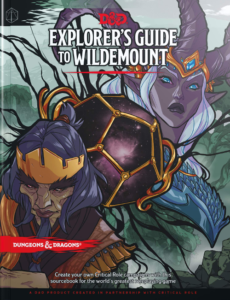 This review is based on the excellent book Explorer’s Guide to Wildemount. It includes a vast array of new subraces, spells, backgrounds, and character options. You can check availability at Amazon below. Note: This site receives an affiliate commission on anything you buy.

For D&D players like myself, there has always been a curiosity about the Dragonborn. On their surface, this race looks so cool! And in many ways it is. But over time there have been some complaints regarding flexibility. Wizards of the Coast seems to have addressed those complaints with Explorer’s Guide to Wildemount.

Dragonborn are common in Wildemount, and most trace their roots to the city-state of Draconia. This city-state was built by two subraces of Dragonborn, the Draconblood foreigners that colonized the city, and the Ravenite Dragonborn that were native to the area.

Despite working together initially, Draconblood quickly taking over as the ruling class and enslaving their kin. Decades ago, Draconia was wiped from the map by the Chroma Conclave which upended Dragonborn culture across the map. In the ensuing chaos, the Ravenite Dragonborn chased their former slavemasters from the Dreemoth Ravine region entirely.

The basic physical traits of a Draconblood Dragonborn are essentially the same as what is set out in the PHB. They are Medium-sized creatures with a base walking speed of 30. Draconblood tend to either be entirely good or evil with little room in-between. They also have the same options for Draconic Ancestry when it comes to selecting a breath weapon, but these lack the bonus resistance. More on that later.

The major changes are the inclusion of Darkvision and Forceful Presence, as well as a different ability score increase. In addition to the different ability score, these changes also replace the Dragonborn’s natural resistance to the type of Firebreath damage they do. For example, a Bronze Draconblood Dragonborn deals lightning damage with their breath attack, but they do not have a resistance to lightning damage. This follows a trend that makes Draconblood less combat-oriented that other Dragonborn.

The ability score increase for this subrace trades swaps strength for intelligence compared to the standard version. The increases are as follows:

In other words, the bonus to charisma stays the same.

Darkvision gives the Draconblood the ability to see in the dark. This trait allows your character to see within 60 feet regardless of any light source. Dimly-lit areas are as bright as day, while pitch black looks more like dim lighting. Darkvision does not allow you to see colors, only varying shades of gray.

Darkvision has obvious benefits for crawling dungeons and operating at night, but the options that Forceful Presence opens up are interesting in a variety of circumstances.

Forceful Presence makes a Draconblood a natural at diplomacy. This trait improves their chances of either negotiating a favorable outcome or intimidating your way into getting what you want.

When it comes to gameplay, your character benefits from making certain Charisma checks (specifically, persuasion or intimidation). You gain advantage when making either of these roles. This trait is not limitless; you will need to complete a short or long rest to use it again.

The Draconblood subrace really stands out when compared to traditional Dragonborn, at least in our eyes. It offers an option to roleplay either nobility or a member of once-powerful slaveowners trying to rebuild their fortune. The roleplaying possibilities are enormous.

When it comes to game mechanics, the Draconblood lose out on the strength bonus and damage resistance that benefits them in combat. That said, the tradeoff is well worth it for many characters. A Draconblood could easily become a master of persuasion, working its way through the halls of power on behalf of your group. Darkvision also offers helpful utility for those that love a good dungeon crawl.

The first thing that came to mind was to find a way to utilize the bonus to Charisma and Forceful Presence while remaining competitive in combat. While this build admittedly does not focus on the +2 intelligence, it still looks fun to me. The stats using the standard array are as follows:

For this build, Charisma and Dexterity are your most important. Intelligence, thanks to your bonus, ends up your second highest skill but you could just as easily swap it with strength or constitution if you plan to be more of a swordfighter and a smooth talker.

For skills, I took Intimidation and Persuasion for obvious reasons. The same is true with Acrobatics and Stealth, which helps with the potential for dueling or just sneaking around in general.

For starting equipment, I went with I was proficient with. This includes light armor, a rapier, a small pistol, an explorer’s pack, leather armor, two daggers, and a gaming set.

Ultimately, Silvertongue’s fate depends on his ability talk his way out of trouble or deal damage without being hit. Early on, he may need to stay out of the fray and snipe with a pistol. As he levels up, his dexterity should allow him flit in and out of combat carving up enemies and avoiding damage.

What I really like about this build is the potential to be the face of a party. Not only can he persuade, he can intimidate.

That wraps out or Draconblood Dragonborn 5E Guide. We’re loving the Adventurer’s Guide to Wildemount and look forward to covering it further. Any thoughts or questions on Dragonborn in general? Hit us up in the comments below!

Dragonlance Races 5E: What Are My Options?

How Long Can You Hold Your Breath 5E? | D&D Swimming Mechanics