All it takes is one bite to change someone permanently. In Van Richten’s Guide to Ravenloft, you are finally able to embrace your vampiric blood. The Dhampir are related to vampires in some way; whether by bite or by breeding, it’s rare to know. They are positioned between life and death, which gives them powers beyond what a living member of their race could possibly feel. Is this a strict upside? Or will their undead nature be their downfall? Find out in our Dhampir 5E guide.

As suggested earlier, Dhampir are positioned between life and death, and walk a very thin tightrope. They feel intense hunger, either for flesh or psychic energies, and may come from a whole host of vampiric origins. No matter what, you are now mostly defined by your defiance of permanent death, and reliance on others life energies. You are identified by your pale skin, sharp features, and pointed fangs.

You may be connected to a Ravenloft Domain of Dread; Barovia, Darkon, and I’Cath might be useful to research for you. Ask your DM if this is a worthy cause to investigate for your backstory, since these vampiristic societies might be handy to know about.

What is a Lineage? 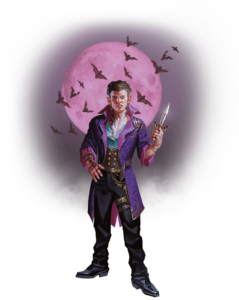 You may choose to increase one ability score by 2 and another by 1, or increase three different scores by 1. This override happens no matter what your base race is. So you always get to choose the best scores for your class, if you want to! Though if giving your Dwarf a bad case of “being a vampire” is what it takes to make them a good Wizard…

You may speak Common and one other language of your choice (or any languages spoken by your Base Race). Talk to your DM about if a particular language makes sense for your Dhampir.

Your create type changes to whatever “type” your new Lineage is. The Dhampir’s creature type is Humanoid, and thus your new type is Humanoid. Talk to your DM about if this makes sense in all situations, such as if they allow a Dhampir Satyr in their campaign.

You replace most of your racial traits with the Dhampir Traits. However, the Dhampir keeps some aspects of the base race; keep that in mind if you have an idea about what your Dhampir was beforehand.

The Dhampir changes a lot about their Base Race. If you have a Base Race, you replace your racial traits with the following traits.

The Dhampir is legitimately very, very strong; arguably stronger than a standard race!

Consider starting as a Lizardfolk or Aarakocra to start with a Swim or Fly speed, respectively. Do know that if you take the Fly speed from Aarakocra, then you don’t get the Dhampir’s bonus skills.

The Dhampir can be fantastic at any role. However, some particularly interesting options include a Constitution-based Fighter that spams their bite, or a Druid that always has a natural attack. Heck, the bite can even work for a Rogue, since your Constitution tends to be high anyways! Alternatively, after level 3, you can be a fantastic Archer by climbing around the walls and repositioning around your enemies.

The Dhampir is, most likely, the strongest lineage you could ask for. You’re ungodly fast, you have fantastic Climb speed, you have a bite that can buff your rolls… It’s actually absurd! Remember to choose between your Base Race’s skills or the 2 free skills before you make a definite decision. You can make a Dhampir work for every class.

Poison 5E Guide | All About Poison in D&D