The Player’s Handbook has a fairly standard suite of races in Dungeons & Dragons 5E… However, one race in particular is pretty different than the rest. The Dragonborn of 5E are the first race that a player has access to that is majorly different. They are clans of tall, muscular reptiles with the blood of the dragons. Their scales are bright, and their pride is much brighter. If you’re thinking about building one of these creatures, our Dragonborn 5E guide will push you in the right direction.

Dragonborn from the Player’s Handbook are close to their draconic blood. Unlike most dragons, Dragonborn are largely communal, living in clans that prefer isolationism. Dragonborn that are in close contact with each other tend to form clan-like structures; each and every Dragonborn understands their duties to one another and follows them closely. To fail your tasks to your clan is to bring major dishonor to yourself. They are occasionally willing to serve dragons, in a role similar to Kobolds, but they are much more likely to be simply near a Dragon’s den than be under the control of anyone. 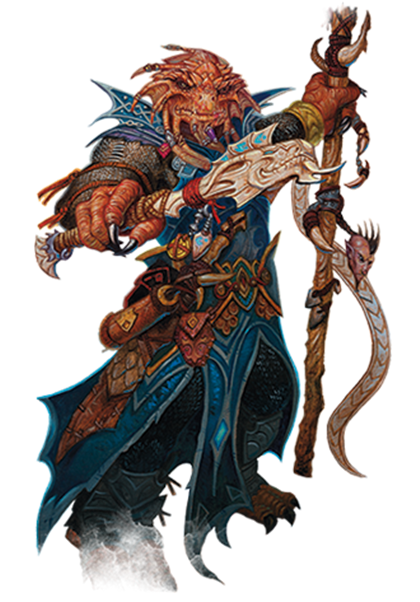 Dragonborn despise failure and push themselves to extremes before giving up on a task. Mastery to a Dragonborn is a perfect life objective; whether the mastery is of magic or weapons, Druidcraft or godly worship. This causes many Dragonborn to wander away from their clan, attempting to locate true mastery from exploration.

The pursuit of mastery does not mean they don’t understand help. They tend to look for help from other dragonborn before wanting help from others. However, a Dragonborn in an adventuring party will often consider them to be their clan, at least temporarily. Unlike a lot of similar races, a Dragonborn may be willing to back down from a demand if it’s considered foolish… Though it is not difficult to provoke a Dragonborn into accepting a challenge that may prove deadly for them.

Dragonborn in Eberron: Rising from the Last War are slightly different. The Ravenite clan are a slave class who have finally broken free from their Draconblood overlords… and seek revenge. The Draconblood are significantly smarter than the average Dragonborn, but much skinnier. They rely on social manipulation to provide for them.

All Dragonborn, whether from Eberron or otherwise, have a link to their clan. That causes their names to be very family-based. If you’re having trouble coming up with a name, check out our Dragonborn naming guide.

The three currently released versions of Dragonborn are vastly different from one another. However, they all share core parts of their kit; you must decide what Dragon you hail from, and this will determine your scale color. Your options are Black (Acid, 30 ft Line), Blue (Lightning Line), Brass (Fire Line), Bronze (Lightning Line), Copper (Acid Line), Gold (Fire 15 ft Cone), Green (Poison Cone), Red (Fire Cone), Silver (Cold Cone), and White (Cold Cone).

The Draconblood keep the Breath Weapon and Languages of the Standard Dragonborn.

Similar to the Draconblood, Ravenites keep Breath Weapon and Languages. However…

Because of the Draconblood and Ravenite, the Dragonborn are pretty damn versatile. They don’t excel especially hard in any role, but they have a ton of good classes.

I’m a huge fan of the Dragonborn’s flavor, but they always seemed to be… Very minimal in comparison to some of the other race options. If you can master the Breath Weapon and use their defensive tactics well, these prideful, dragonblooded creatures will be great… But keep your mind open, and try to build for character. Hopefully, this Dragonborn 5E guide helped guide you through what makes these guys tick!