Welcome back from your raid, Eivor! So soon, you’re back to doing missions and figuring out mechanics. Are you worried about messing up during the flyt with Alvis, or when you enchant your axe? Well, don’t worry! Nerds and Scoundrels is here to help you choose the right options during your first steps into the world of the Norse. You don’t need to strictly follow this guide (and there are funny dialogue options for if you fail!), but we hope this will alleviate your fears and let you relax during the early missions of the game. So, without further ado, here’s our Family Matters walkthrough!

Family Matters is a rather short quest, but it offers some basic tutorials for some major side story types. If you want the best of Family Matters, make sure you check out some NPCs outside of Gunnar and Randvi! 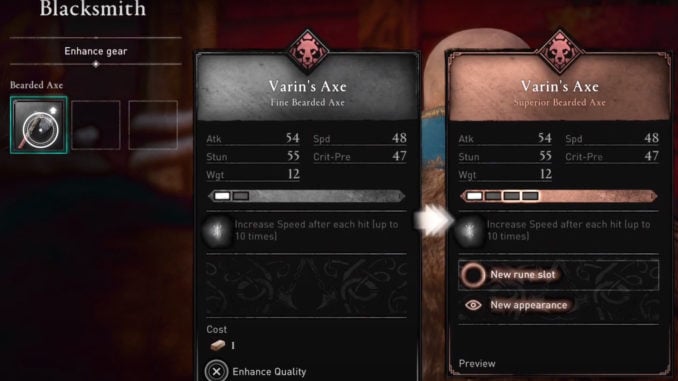 Gunnar allows you to upgrade your Father’s axe. This upgrade is cosmetic and unlocks a rune slot for it, which is nice. Thankfully, this rune slot is filled by a Minor Rune of Rage, which boosts the weapon’s attack right away.

Don’t worry about how weak the rune is, though! You’re able to swap out runes at will, so you can easily find another one.

Before returning to Randvi, you should get the flyt tutorial done! Alvis isn’t required to complete this mission, but he’s a nice objective to grab for later. Flyting is a battle of wits where you require some clever wordplay and quick reactions, but also a good rhythm.

For example, in your first option. You have two options that rhyme, but only the bottom most option rhymes on rhythm. If you can’t quite read it out, say it out loud on beat with your opponent! You’ll get used to the speed of the challenge in no time.

That’s not the only thing Alvis teaches you! Don’t overreact to your opponent, either.

So, your best options are

Winning these duels can really boost up your charisma stat! So if you want the best dialogue options, remember;

Orlog is a game you can play in town. Find the Norse Man laying in front of a building with a panel of wood, and he’ll challenge you to a round. The game leads you to him by the two dice on the tracker.

You roll a set of six dice. The dice deal two different types of damage, block against the specific type of damage, or gather currency for buffs. 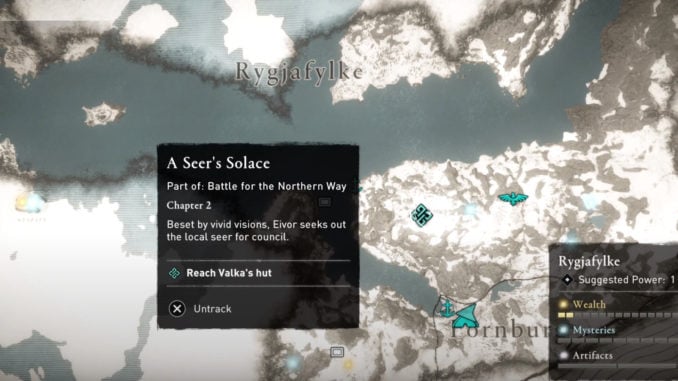 Once you’re ready, talk to Randvi to start heading towards the Seer’s Hut.

The hut is fairly close to a fast travel point if you’re the exploring type! Similar to older Assassin’s Creed games, these fast travel points unlock only if you’ve been there before. Then, you can just follow the compass! Eivor is quite good at climbing or horseback, so you’ll get there in no time. Make sure you slap some glowing rock piles to gather iron and upgrade materials, so you can get started strong!

Once you get there, it’s a pretty simple follow-the-ghost mission to witness your brother’s fate. Once you complete A Seer’s Solace, head back to town to talk to Randvi and complete both quests!

Looking for some more Valhalla coverage? Be sure to keep checking our website to keep up with any quests that you might be having trouble with. We’re going to keep our eyes open for quests and events that you might need help with!