Wild Beyond The Witchlight Races Guide

There are two new races available in this supplement: Fairy and Harengon. Most people will be familiar with the concept of fairies, but Harengon might be a new one to most people. Harengon are the rabbit race that resides in the Feywild.

One of the things that jumps out about both of these races is that they follow WOTC’s trend of shying away from race-based ability scores. Neither race comes with built in bonuses. Instead, the character creation chapter merely guides the player to increase one score by 2 and increase a different score by 1, or increase three different scores by 1.

Most of the traits of fairies are a good thematic fit. These characters are a fey creature type that are size small. A fairies’ walking speed is 30 feet, but they also have a flying speed equal to their walking speed thanks to their wings. It is worth noting a fairy cannot fly if they are wearing medium or heavy armor.

The other central trait for fairies is Fairy Magic. Fairies have innate magical casting abilities starting with the druidcraft cantrip. At higher levels, they pick up faerie fire and enlarge/reduce.

There are plenty of interesting notes on the rabbitfolk race known as the Harengon. Unlike with most races in 5E, you have the option to choose either small or medium size for your character. The other basic background information is unsurprising, as they are humanoids with a walking speed of 30 feet. 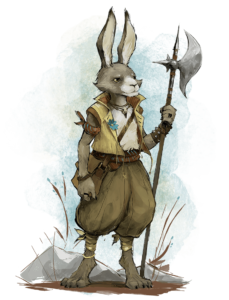 The racial traits for the Harengon very much fit the rabbit theme. Hare-Trigger adds your proficiency bonus initiative rolls and Leporine Senses gives you proficiency with Perception. Rabbit Hop is my favorite aspect of this race. As a bonus action, you can jump a number of feet equal to 4 times your proficiency bonus without drawing opportunity attacks. There are some limits on its use, but it is a great way to get out of trouble.

Finally, the Harengon even gets a boost on Dexterity saves. With Lucky Footwork, you can roll a d4 on a failed dex save and add the result to your score. There is no limit on the number of times you can use it, but it’s not available if you are prone or have a speed of zero.

Wrapping Up our Wild Beyond The Witchlight Races Guide

That concludes our rundown of the new races in Wild Beyond the Witchlight. Do either of these new options speak to you? Let us know in the comment section below!