Rangers have been much maligned in 5E. While I think that’s largely unfair, the updated content in Tasha’s Cauldron of Everything should dispel that notion entirely. Among the other changes to the Ranger, the highlight comes in the form of a new subclass: The Swarmkeeper. Let’s dive into our Swarmkeeper 5E Guide to see what the buzz is about!

The central focus of this subclass is on a swarm of tiny creatures that you control. These could be anything from insects to pixies. The swarm grows in power as you level, eventually dealing significant damage and even allowing you to fly.

As soon as you take this archetype, you get to pick your swarm!

A swarm of intangible nature spirits has bonded itself to you and can assist you in battle. Until you die, the swarm remains in your space, crawling on you or flying and skittering around you within your space. You determine its appearance, or you generate its appearance by rolling on the Swarm Appearance table.

Once on each of your turns, you can cause the swarm to assist you in one of the following ways, immediately after you hit a creature with an attack:

Your swarm is the central feature of the subclass, and it is a lot of fun. It is reminiscent of Hex or Hunter’s Mark in that you can use it to tack on additional damage to a successful attack. However, it also gives you options to move yourself or a hostile around the battle map. This only gets stronger as you level, too.

At Level 3, you also gain access to additional spells. Each of the spells on this list does not count against the ranger spells you know.

You learn the mage hand cantrip if you don’t already know it. When you cast it, the hand takes the form of your swarming nature spirits.

At level 7, you gain the ability to use the swarm to fly. This is nice, although it is weaker than many other flight options in different subclasses.

You can condense part of your swarm into a focused mass that lifts you up. As a bonus action, you gain a flying speed of 10 feet and can hover. This effect lasts for 1 minute or until you are incapacitated.

You can use this feature a number of times equal to your proficiency bonus, and you regain all expended uses when you finish a long rest.

So you can fly! That’s great! But your speed is only 10 ft. Not so great. What’s more, this effect only works for one minute at a time. At the highest levels, you can only fly six minutes each day. So flying is great, but you will have to time out the use of this ability carefully each day.

At level 11, you get a noticeable boost to the power of the swarm.

Your Gathered Swarm grows mightier in the following ways:

While none of these options are overpowered, they each add a nice boost to the power of the swarm. Dishing out 1d8 damage outpaces both Hex and Hunter’s Mark, although it does not have the added benefits that come with those spells. However, one big advantage is that this feature is not a spell and it does not require concentration. You maintain the benefits of the swarm for as long as you are conscious.

The damage boost is nice, but the other options are also excellent depending on the circumstances. The ability to knock a hostile prone or give yourself half cover almost at will can be very helpful.

At level 15, you can become one with the swarm.

You can discorporate into your swarm, avoiding danger. When you take damage, you can use your reaction to give yourself resistance to that damage. You vanish into your swarm and then teleport to an unoccupied space that you can see within 30 feet of you, where you reappear with the swarm.

You can use this feature a number of times equal to your proficiency bonus, and you regain all expended uses when you finish a long rest.

This is great all around. Not only does the swarm now improve your tank, it also allows you to teleport. When you obtain Swarming Dispersal, you get five uses of it before you require a long rest. At level 17, you get up to six uses.

Whether or not that is a lot of uses depends largely on the type of campaign you run. If you are generally facing one large fight per session, six uses can go pretty far. This also greatly improves your survivability in combat while also giving you a method of disengaging that is extremely powerful. 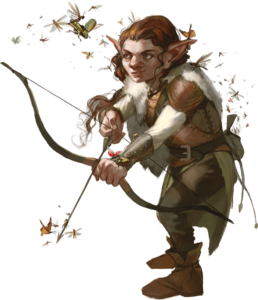 No matter the direction you take with your Swarmkeeper, you are likely going to want to focus on dexterity. If you plan on doing much in the way of spellcasting, wisdom is going to be pretty important too. Both of these options give you nice boosts in the right abilities.

Picking the variant human is a bit of a copout since it’s great at basically everything. However, it is a great option for a swarmkeeper for a few reasons. First, you get the boost to dexterity and wisdom that you need. What’s more, you can nab a feat that could come in handy for a number of builds. If you want a range build, Crossbow Expert or sharpshooter is nice.

It is hard to beat a Kenku when it comes to rangers in general. The ability score bonuses could not be a better fit, and the extra skill can close the gap with the rogue in your group. The Kenku works whether you are going for a ranged / casting approach or a dexterity melee build. In either option, the swarm can be useful.

That wraps up our Swarmkeeper 5E Guide! Altogether, this is my favorite subclass from Tasha’s Cauldron of Everything. The central theme is fun, but it is also useful. Having options to add damage, move characters around the battlefield, and fly are all strong uses of the swarm.

Does Strixhaven: A Curriculum of Chaos Have Subclasses?