Tasha’s Cauldron of Everything brings the heat with this subclass! The Wildfire druid is a Tasha’s exclusive. Wildfire druids are firm believers in the circle of life; destruction to growth. A Volcano may bring down a forest, but the soot left behind will grow into a greater tree. To prove their dedication to this cycle, they’ve partnered with a destructive spirit, and have brought creative power to it. So, our Circle of Wildfire 5E guide will teach you to bring the cycle into dungeons!

The Wildfire Druid is a pseudo-blaster and pseudo-healer. The Druid gains some extra spells that are useful for both killing and healing, with heavy fire themes. Then, for class skills, you gain the ability to heal or harm based on how close creatures are to a little Wildfire Spirit. This spirit is your primary mechanic, and keeping it alive is one of the main goals of your class.

First, though, you gain some spells. These spells are always prepared, and use your druid casting stats to cast.

Burning Hands is fantastic early on, but quickly gets outclassed. It’s a good level 1 spell, at least! Cure Wounds is a pretty standard healing spell. I’d prefer Healing Word, but at least you get some healing that you always have prepared.

Flaming Sphere is a fairly devastating level 2 spell, being one of the earliest concentration spells that damages every turn. It’s a good use of a spell slot for the potential damage it can deal. Scorching Ray is a great ranged option which deals crazy damage at level 3 and slowly falls off.

Plant Growth is your first utility spell, and it’s versatile enough to be hindering to enemies. Extremely difficult terrain is annoying to get through and can potentially completely negate melee-based enemies. Revivify is the earliest that you can revive creatures, and isn’t available to druids normally. This alone makes you a pretty stellar healer.

Aura of Life is pretty situational; better at boxing Liches than anything else. Still, it can be useful if you need to pick up allies from the ground if multiple got knocked unconscious, and is a decent use of concentration. Fire Shield is good for both anti-fire and anti-cold. If a creature has multiple melee attacks, then they are going to be in a world of hurt.

Finally, Flame Strike is… fine? It’s a pretty mediocre area of effect spell, and you don’t get Fireball. At least it deals fine damage and can deal with legitimate problems on a battlefield. Mass Cure Wounds is good for picking up a ton of creatures from unconsciousness… but once again, I wish it was Mass Healing Word.

Overall, good spell list. A ton of damage and good healing spells, but with a fair bit of utility sprinkled in there.

The Wildfire Spirit is your replacement for Wild Shape. You summon a spirit for an hour. On the turn that you summon it, creatures within 10 feet of it (other than you) get a dexterity save to avoid taking 2d6. You have to spend bonus actions to command it or else it will just dodge (unless you’re knocked out, in which case it will defend you and your allies).

The actual creature has 13 AC, decent hit points, can fly, and has good immunities in general. It’s basic attack, Flame Seed, spits at a creature within 60 ft for 1d6 + proficiency bonus. It can also teleport any creature that is willing 15 feet, dealing damage to any creature that the Spirit left behind.

The spirit itself is fine. It’s not the tankiest bugger around, nor does it do insane damage. It has fantastic mobility, with flight and a teleport, and the summon damage is great for a level 2 creature summon. However, don’t expect this to tank anything but the most fiery of mages for you.

Thankfully, the spirit is designed to be a conduit for your spells (and for a 1d6+PB bonus action attack). And if you need a teleport, then your Wild Shape lets you teleport your entire party… For an hour. That’s pretty hot! It just doesn’t fill the same role as a traditional summon.

At level 6, you gain hard buffs while your Spirit is out.

In addition, when you cast a spell with a range other than self, the spell can originate from you or your wildfire spirit.

A d8 averages to 5, so you’re adding 5 to the damage of your magic, or to the healing of your magic. Now, strangely, this doesn’t seem to worry about area-of-effect magic, since you traditionally roll damage for that once. That means your area-of-effect magic just got a huge boost! Druids don’t have great fire-based area of effect, but hey, at least Flamestrike got a little better, right? And Burning Hands is actually just a touch better. And don’t forget, most DMs would agree that Cantrips are Spells for the purpose of this ability!

The healing buff is less important, but it’s nice to have that extra boost in healing sometimes. Unfortunately, very few DMs will let you add this d8 to every berry in goodberry. Oh well.

The second boon is situational but still nice. There aren’t many spells that won’t have enough range to cover an entire battlefield. If you find yourself needing to, send your Spirit out into the center of a fight, lob a seed, and then use them to cast your spell. That’s super useful for touch spells; you’d much rather have your Spirit get body slammed by an Orc than you!

Your 10th level is pretty dang interesting; you channel Phoenixes and either harm or heal based on deaths.

When a Small or larger creature dies within 30 feet of you or your wildfire spirit, a harmless spectral flame springs forth in the dead creature’s space and flickers there for 1 minute. When a creature you can see enters that space, you can use your reaction to extinguish the spectral flame there and either heal the creature or deal fire damage to it. The healing or damage equals 2d10 + your Wisdom modifier.

You can use this reaction a number of times equal to your proficiency bonus, and you regain all expended uses when you finish a long rest.

So, there’s a problem here; this deals damage to creatures who walk into the spectral flame. It’s going to be rare that a creature sees that little flame and thinks “ah, yes, I’ll just walk right into that.” If they do, dealing an average of 17 or so damage is actually great! And it doesn’t say that there’s any save to it, so that’s a ton of guaranteed damage! Especially if your Fighter can shove them into that space somehow.

The healing is less important, but about 17 health is pretty significant. That’s almost a full hit for most monsters. If you don’t have much synergy for pushing monsters around the battlefield on your team, you might as well take the extra healing. But, if your frontlines or you can move creatures around like crazy, then the guaranteed damage is well worth it!

Finally, at level 14, you can sacrifice your summon to keep yourself alive… You selfish fool!

Once you use this feature, you can’t use it again until you finish a long rest.

That was aggressive of me, this is great.

On average, this will heal you for about 40 health at level 14, more if you have good Constitution. The range isn’t even a problem; 120 feet is gigantic. So, you’re sacrificing your spirit for somewhere around 50 points of healing and keeping you from going down, without even using your reaction.

That’s… absolutely worth it. Based on the situation.

If you’re the only healer that the party has, it is so important that you keep yourself healed up. You’re the one that saves other people from dying, so you need to stay conscious. Destroy your spirit to ensure you survive!

Unfortunately, this does little for your poor stacks of Wild Shape, since you almost definitely need to resummon your spirit afterwards. Just make sure you take a short rest soon after you pop this ability, and start playing things safe if you can! 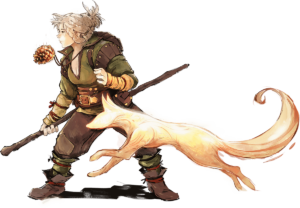 Wisdom is incredibly important for Wildfire Circle druids. Afterwards, if you’re trying to be the party’s healer, Constitution will keep you alive, and Dexterity is good for AC.

However, you are so desperate for fire damage. Variant Human, get +1 to Wisdom, +1 Dexterity or Constitution. For your feat, take Elemental Adept to ensure that you aren’t going to get completely bodied by anything with Fire Resistance. Just to keep things safe, since your main mechanics are centered around dealing Fire damage.

If you’d prefer to focus on healing, any race with the Mark of Healing is a good consideration. The Mark of Healing Halfling gains Medical Intuition, which adds a d5 to Medicine or Herbalism kit checks. In addition, the Healing Touch ability is incredibly good for a healer, allowing for extra casts of crucial spells. If that wasn’t good enough, you can prepare great spells like Mass Healing Word and Aura of Vitality, should you wish. That’s on top of a Halfling’s stellar +2 Dex, +1 Wisdom, Halfling’s Lucky ability, and Brave!

Conclusion – Our Take on the Circle of Wildfire

The Circle of Wildfire is really unique – Typical of Tasha’s Cauldron! Being so split between healing and damage might seem problematic, but it’s such a good combo for a druid! Use your cantrips and spells wisely, and you’ll bring great suffering… and just the opposite!

Martial Weapons 5E: How Do They Work?