The guardians of nature are in a bit of a pickle in Dungeons & Dragons 5E. Without too much of an argument, they are the weakest class in the game. They suffer a lot from their class features… But with spells like Hunter’s Mark, they have some potential. That being said, the Ranger is in dire need of strong magic items to ensure that they are a threat in combat. Our Best magic items for Ranger guide will help you think of a perfect build

The Ranger is in dire need of some magical aid. Getting your Ranged damage boosts, basic defensive items, and mobility options will be crucial. Depending on your remaining needs, you can get some utility… Though, Rangers have plenty of utility to begin with! Make sure you keep up with your +1, +2, and +3 Weapons so you can deal good damage with above-average accuracy. 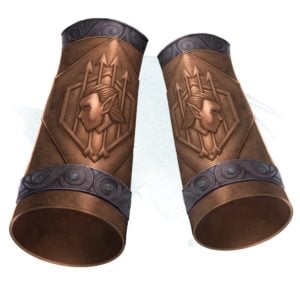 This is a low-level item, but that means you can get it very early on. For a ranged character, this adds 2 to the damage of any attack you make. That might not seem like very much, but it adds up. With your Archery Fighting Style, you are almost guaranteed to hit this +2 damage attack. Pick this up early, and then you can throw it away once you need more attunement slots. But in the early levels, this will be so nice.

For defensive items, Dragon Scale Mail is arguably as good as +3 Medium armor. If you can get a Dragon Scale Mail that counters the encounter that you’re approaching, then you’re golden! If not, having a source of permanent Fire or Cold resistance will be handy. And that’s not all the armor does! It makes fighting dragons so much easier. Also, you can sense a dragon… Though that’s redundant, thanks to Primeval Awareness.

The Oathbow is one of the more interesting (and one of the few!) ranged items that you can find. With the Oathbow, you can specifically target an enemy and deal an absolutely ridiculous amount of damage. With Hunter’s Mark and Colossus Slayer along with the 3d6 damage from the Oathbow, every arrow will absolutely crush your target. Just… Make sure that you really like using bows, in case the enemy runs away.

The Scarab of Protection is the best anti-magic item in the game. However, it’s legendary; you can use a Mantle of Spell Resistance or Cloak of Protection if you need to. The Scarab is the best because you not only gain the advantage on spells; you also get immunity to up to 12 failed Necromancy saves. That will save your life once or twice.

If you want a non-numerical enchantment for your weapon, a Weapon of Warning might be for you. This weapon allows you to be first in most fights. That means you have a better chance to buff up, get in range of your enemies, or just hit really hard right off the bat. It also has the bonus benefit which allows you to ignore the Surprise attack. That is a very situational, niche option… But hey, at least it’s your situational option.

The Winged Boots are very important for melee Rangers, though it does have benefits for archers. The positioning and increased mobility is critical for melee. You don’t want to get shut down because you can’t hit the enemy, after all! For ranged characters, you need to move around just as much! Shooting around obstacles and chasing priority targets. Overall, this is good for you. Prioritize it if you’re melee, consider it if you’re ranged.

Melee rangers tend to be focused around Dexterity. However, the Belt of Giant Strength will work pretty well for a Two-Weapon Fighter Ranger, without sacrificing your Dexterity. +9 (with the Storm Giant Belt) is a gigantic modifier to attack and damage rolls, especially with how often the Ranger can attack. Try to prioritize this if you are the primary melee attacker of the party.

Rangers have access to Pass Without Trace and other spells that greatly improve your stealth. However, they don’t have many ways to become invisible. Dust of Disappearance is a great consumable for the Ranger, since it can turn multiple items and characters invisible on a need-based basis. If you want a permanent option, the Cloak of Elvenkind or Cloak of Invisibility is fantastic for a Ranger.

The Bands are a strong item for an Archery Style Ranger. Being able to throw these out with a +2 to attack is actually pretty cool. The Ranger does have decent Crowd Control with spells like Ensnaring Strike. But, this item ensures that the Restrained status works against Large or Huge creatures without offering the advantage on Saving Throws. It’s also much longer in duration. Perfect for capturing, and you’re by a good margin the best character to make use of these.

Manual of Quickness of Action

For Ranged characters, Dexterity is crucial. This Manual boosts your Dexterity and Dexterity cap by 2. That’s pretty stellar! Rangers make plenty of attacks and deal good damage based on their Dexterity. You have fairly high priority over this book, though a Monk might get it first.

The Ranger might be one of the weaker classes, but it has a lot of potential. Using magic items to supplement your damage will be a great step in making your Ranger feel more influential in fights. Whether you’re ranged or melee, magical items can solve your myriad of problems quite effectively. Just make sure that your magic items supplement your combat strategies before you pick up utility items, since your utility options are great naturally.

Did we miss any awesome magic items for Ranger? Tell us about them in the comments so others can learn good strategies!