Over the last few years, Chromebooks have been a great and affordable option for people who want a laptop, but don’t want to deal with the baggage that Windows or macOS comes with. During that time they have been constantly improving in almost every way. Improvements in build quality, performance, and most importantly: choice. More recently, Chromebooks have been able to enter the world of gaming in a more legitimate way. Boasting specs that are comparable to many budget laptops out there. That’s right, now you can finally play Minecraft on a Chromebook and not feel weird about it. Read on as we discuss the Best Chromebook for Minecraft. 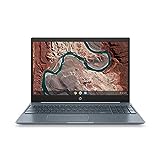 The Best Chromebook for Minecraft

At this point in the Chromebook life cycle, there are a lot of choices out there. At first glance, it can be pretty confusing. But don’t worry, that’s why we’re here! We’re going to be putting a bunch of Chromebooks to the test by seeing which one is the best for playing Minecraft in 2020. Now, let’s get right into it!

Sharing a lot in common with our previous choice, this Lenovo 2019 Chromebook is another great choice. With a sleek white body and black keyboard, this model looks crisp and stands out from the crowd. It also has a newer feature in that the monitor itself is a touchscreen, which is a nice addition. Especially with access to the Google Play store, so you can play all kinds of mobile games. It also comes with a built-in webcam that outputs at 720p, handy for those who don’t have a webcam already.

The body on this machine is made out of plastic, though that may sound cheap, what it does offer you is lightweight. Weighing in at 2.65lbs this is another great machine to take with you to different places. The screen is also once again a 1366×768 resolution display, so 1080p gaming is not here just yet. Though it may not seem like it, this machine is a definitive upgrade over our last entry due to one thing, the Mediatek MT8173 processor. This CPU is able to handle most games a lot better and is going to give you better performance.

Accompanying this is great battery life, able to last around 10 hours before needing a recharge. This, of course, is going to depend on what you’re using the Chromebook for. Gaming may drain the battery fairly quickly so just bear that in mind. All in all, this is a really great Chromebook that offers a lot. Though that might not be enough for you, so if you want something that has more power, maybe our next choice is the one for you.

This Acer Chromebook is a massive step up in terms of both performance and looks. With a 1920×1080 resolution, touchscreen display, we’ve reached 1080p in this list, So if you’re looking for that in your Chromebook it’s already ticked that box. Then we have the relatively massive size of the display, sitting at 15.6”. Meaning that whatever you’re using this machine for, it’s going to look good. The trade-off for all of this is that it is going to be heavier. Weighing in at around 5.6lbs means that you might not want to be taking this with you wherever you go.

Another step up here is the hard drive which is a 32GB eMMC. Even though a Chromebook is mainly a device for performing tasks through a browser it can still be used to store files physically onto the hard drive. So the inclusion of this eMMC drive is great, especially if you’re going to be playing Minecraft with it. Along with that you’re getting your usual USB ports, HDMI out, integrated webcam and SD card reader so all in all this a great machine.

The only real aspect that this Chromebook lacks is its portability. Yes, you can feasibly take it on work trips or on long commutes but the issue here really is its size. Of course if you aren’t planning on taking it anywhere or if you don’t work while on the move there’s really nothing to worry about. It’s got a great battery life so however way you want to use this Chromebook it’s got you covered. But, if you want something light with a combination of power, our next choice might be the one for you.

Now, for this pick in our Best Chromebook for Minecraft guide, we’ve gone for the HP x360-14 Chromebook. Featuring a 14” 1366×768 display which might seem like quite a loss in comparison to our previous choice, but this machine more than makes up for it. Because of the smaller screen, this is a much lighter Chromebook once again, perfect for work trips and general use. As well as all of that this Chromebook has an extra feature in its 360 degrees screen rotation. Which is a nice little inclusion along with the touchscreen that we’re pretty used to seeing at this point.

Now to talk about why you would really be interested in this machine and that’s to do with the performance. Unlike the other choices in this list which have had processors that are comparable to smartphones or tablets, the Intel i3-2370M was made for laptops. Which means that it is built to do more demanding tasks and if you want this Chromebook to play Minecraft or any other games it is invaluable. The integrated graphics chip is also nothing to scoff at with it being able to run most games released up to 2015 at medium settings.

Other notable features include its 64GB of eMMC hard drive space, USB drives, headphone jack, etc. But missing here is the HDMI out functionality, so if you don’t already have a converter for USB to HDMI you might be out of luck there. But don’t let that put you off because really this a great Chromebook for work, gaming and everything in between. If that hasn’t really satisfied you then maybe our last choice will.

This New 2020 HP Chromebook is the newest on this list and combines almost all of the positive qualities of our picks into one machine. Within its sleek black and white body, we once again have a 15.6” 1920×1080 resolution display. Which of course brings back the weight problem so think about your lifestyle before choosing this one. The screen itself is nice and crisp, perfect for anything you might use it for. Again having touchscreen functionality to make certain tasks much easier to perform.

Performance-wise we have a newer and more powerful processor in the form of the Intel i3-8130U. This Quad-core processor is more than enough to handle the tasks that you’d be performing on a Chromebook as well as gaming. Once again it houses the Intel HD 620 integrated graphics chip so you’ll definitely be able to play Minecraft no problem. Making life even easier is the 128GB eMMC hard drive that should be more than enough storage for a Chromebook.

In fact, the only downside to this Chromebook in comparison to some of our other choices is the lower amount of RAM coming to a total of 4GB. Now, that should be more than enough, but if you’re looking to do some heavy amounts of work or play intensive games you may see issues so just bear that in mind. All in all, though this Chromebook is a great machine and should be more than capable of playing Minecraft to a very high quality. It’s pretty unlikely that you’re going to run into any glaring issues with it but there are a few negatives. First off is the lack of an HDMI port once again, which is always a shame for those who like to work on a monitor of their choice. Then again is the weight, meaning that taking it with you wherever you go.

Our first choice in this list focuses on portability and is our entry-level choice. If you are someone who wants to take a Chromebook on trips, journeys, etc, this Samsung 11.6 Inch Screen Chromebook is a great pick for you. Now you might not have immediately thought of Samsung as a brand for our starting choice. Considering they tend to stay on the Smartphone and tablet market. But they do make Chromebooks and they’re especially good. This particular model is one of the most recent in their lineup and is great in a lot of different ways.

First off, we need to talk about a few of the potential shortcomings with this Chromebook. The screen itself is not full HD at 1920×1080. Instead, it outputs at a 1366×768 resolution. So if that’s something you don’t want in your Chromebook then this isn’t the one for you. This is somewhat alleviated if you own an external monitor at home or if you have one in your workplace as it does come with an HDMI-out port. Allowing you to get a clearer image on your monitor. The laptop is also quite thick, measuring at around 0.7”, which could be annoying if you’re used to an ultrathin laptop or Chromebook.

This is still a great product however, coming with a good amount of RAM at 4GB that should be enough for most tasks you’ll find yourself doing. The Intel Atom quad-core processor is also great for what you should be doing on a Chromebook but when it comes to gaming this where you could be limited. You should be able to run Minecraft on low to medium settings just fine but anything beyond that might result in unsatisfactory performance. If you want a Chromebook with a little more power, check out our next option.

With that, we come to the end of our list for ‘The Best Chromebook for Minecraft in 2020’. All of these Chromebooks are more than capable of running Minecraft and beyond that are great for working. Chromebooks are getting better and more powerful with time so we might be seeing some really cool innovations soon. If this list helped you find your new favourite Chromebook, let us know and thanks for reading! Looking for other recommendations? Check out our pick for Best Laptop for Game Development!