Tasha’s Cauldron of Everything has a really big soft spot for psychics. A ton of classes got something to do with the power of the mind. The Sorcerer was no different! The Aberrant Mind sorcerer has a brain that goes far beyond simple mortal understanding. They might be related to (or infected by) a Mind Flayer, or simply have unlocked more aspects of their mind. No matter what, you have a strange brain, and are connected to others in new and exciting ways. How to flex your mental prowess… Maybe in a dungeon! Try it out, with our Aberrant Mind 5E guide!

The Aberrant Sorcerer is a psychic. They have amazing problem-solving skills and gain some abilities that make them good against creatures with minds. As such, you’ll be playing a utility-driven Sorcerer with the ability to really impact the battlefield when necessary, with more than just flames or the elements.

In addition, whenever you gain a level, you can replace a spell from this feature with another from the same level. Those spells can be any divination or enchantment spell from the sorcerer, warlock, or wizard lists.

Wow, this is a really intense class feature! Let’s go over your spells quickly.

Arms of Hadar is a fine area of effect spell that lets you escape attacks of opportunity. Realistically not too useful; sorcerers shouldn’t be surrounded by enemies in the first place. Dissonant Whispers is great combat control, but only makes them move away on a failed save. You’re relying a lot on that, but it burns the reaction which is always nice. Mind Sliver is a cool cantrip that lets you set up for a strong spell coming up… and is honestly one of the best cantrips in the game. At least, against thinking creatures. 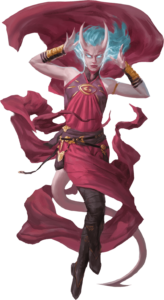 Calm Emotions can deflate really tense social situations, and can counter Barbarians quite easily. However, it’s far from the most commonly effective spell, so you’ll probably want to swap this out. Detect Thoughts is a great tool to fight invisibility, and figure out information at the same time. This one’s a keeper!

Hunger of Hadar is an intense darkness spell that also does additional damage. 2d6 guaranteed, 2d6 otherwise. It’s good battlefield control and is actually a darkness spell that really does something. Sending just delivers a message, which is nice to have, but probably better on a Cleric or Wizard that doesn’t have a limit to spells known.

Evard’s Black Tentacles is fantastic combat control that can lock down a huge swath of enemies for you. This is a really useful fireball replacement! Summon Aberration is a fine summoning spell with a tanky creature, though spending 400 gold on it might not be too good for your wallet.

Rary’s Telepathic Bond is a really high level source of messaging… but you get an ability that essentially does the same thing. It’s a bit too situational just because of your class abilities. Telekinesis has a ton of different options attached to it, and thus you can mess with the battlefield in a ton of different ways. It’s fun, can do a ton, and is useful on non-intelligent enemies. That’s really good!

And if you don’t like any of them, you can replace them with spells. Not only is that useful, it’s the best spell list in the game! You can mix and match as much as you like… Well, given you have some levels. Choose the spells that help you the most.

Also at level one, you gain the ability to telepathically link with your fellow party members… Or anyone else!

As a bonus action, choose one creature you can see within 30 feet of you. You and the chosen creature can speak telepathically with each other while the two of you are within a number of miles of each other equal to your Charisma modifier (minimum of 1 mile). To understand each other, you each must speak mentally in a language the other knows.

The telepathic connection lasts for a number of minutes equal to your sorcerer level. It ends early if you are incapacitated or die or if you use this ability to form a connection with a different creature.

This telepathy has one major disadvantage; you can’t automatically understand your conversation partner. Otherwise, this is about as good as any other telepathy in the game… And you get it at level one… As a bonus action.

This allows you to make on-the-fly plays without needing to alert your enemies. You can also hold hidden conversations with others without alerting anyone else. The mile range is kinda unnecessary, but does allow you to do random teleports and eventually find each other again.

There is no limit to the number of times per day you can do this, either. Just keep telepathically talking to your friends… and maybe even your enemies. It says nothing about the creature being willing!

At level 6, you gain some interesting spell savings.

When you cast any spell of 1st level or higher from your Psionic Spells feature, you can cast it by expending a spell slot as normal or by spending a number of sorcery points equal to the spell’s level.

That’s pretty stellar! You can spend sorcery points instead of spell slots, and at a premium! Normally, spell slots cost a lot more in sorcery points. Sure, you won’t be able to use Metamagic if you spam this ability. But, you also get free summon spells, or get to use a 5th level spell much more often than you’re normally allowed!

Try to make sure your Psionic Spells list is full of spells you like to spam. This ability will really make them more useful, since your sorcery points are more common than your spell slots.

Also at level 6, you get some damage reduction.

You gain resistance to psychic damage, and you have advantage on saving throws against being charmed or frightened.

Cool! Psychic damage is admittedly not too common. It’s usually only available through spells or specific enemies… And even then, not in high quantities. You’ll be lucky if this comes up often, if at all.

When it does come up, any damage resistance is good damage resistance! And some psychic spells can really hurt you, like Phantasmal Killer. You’re at least not going to notice your brain getting stabbed nearly as much.

Charmed and frightened advantage is a nice addition. You’ll be more useful against psychic enemies if you’re able to attack them, and aren’t just running away all the time. Now you get two chances to save!

At level 14, you gain the ability to transform your body into… A lot of things. Spend 1 sorcery point, and then spend up to 3 more to gain one benefit for each point spent;

You retain these benefits for 10 minutes.

I want to see the situation where you need all four of these. Usually, you’ll probably take the fly speed and be more than happy with this ability. One sorcery point for a mini-Fly spell is fantastic! In addition, you can get See Invisibility… Admittedly, a lower level spell, but against invisible creatures it’s invaluable.

Your other options are a little bit situational, but when the situation pops up, 60 ft swim speed with the ability to breath underwater is actually stellar. And being able to wiggle through one inch grasps can be absolutely essential for escaping prisons or whatnot.

Honestly, this is a pretty amazing toolkit. Spend your Sorcery on Fly, and then save the rest for spellcasting. Just remember your options, because you can really get out of awful situations with most of these.

The final ability that your origin grants you is quite unique… In a really good way! At level 18, you can do this;

As an action, you can teleport to an unoccupied space you can see within 120 feet of you. Immediately after you disappear, each creature within 30 feet of the space you left must make a Strength saving throw. On a failed save, a creature takes 3d10 force damage and is pulled straight toward the space you left, ending in an unoccupied space as close to your former space as possible. On a successful save, the creature takes half as much damage and isn’t pulled.

Once you use this feature, you can’t do so again until you finish a long rest, unless you spend 5 sorcery points to use it again.

This is a great get-out-of-jail free card, letting you get a pretty explosive teleport and sets your party up to deal with the scraps you left behind.

However… After the first time you use Warping Implosion, it costs 5 sorcery points. Five! That’s expensive for a 120 foot teleport. And the damage isn’t exactly impressive; 3d10 is only about 17 average damage. That’s not worth what you could alternatively spend 5 points on.

Use this once per day to get yourself out of danger. Then, consider using Misty Step or other teleportation options, and saving your points for metamagic or stronger spells.

Like most sorcerers, Charisma is the key to winning for an Aberrant Mind. Afterwards, tank up with Dexterity and Constitution. You might want to find a skilled race to make use of your ability to talk to people easily…

This is admittedly boring, but Half-Elves make fantastic Aberrant Mind Sorcerers. The standard Half-Elf gains +2 Charisma, +1 to two other stats. That’s great! You can get high Charisma, Dexterity, and Constitution! Darkvision is a lifesaver in most dungeons, and Skill Versatility will let you become proficient in all of the Charisma skills, if you really want to! Your Fey Ancestry is sadly a little wasted, but at least you have something to protect you from Charms until level 6!

Tieflings got bloodlines in Mordekainnen’s Tome of Foes! By being a descendant of Glasya, you gain +2 Charisma and +1 Dexterity. You also gain Darkvision, resistance to Fire Damage, and some awesome illusion spells. This can really be useful if you want to expand your utility!

Conclusion – Our Take on the Aberrant Mind Sorcerer

The Aberrant Mind has great utility against enemies that can be fooled by illusions and other tricks. If that wasn’t enough, they’re also fairly good at dealing damage, since psychic spells tend to at least do some damage on the target. Check this out if you’re looking for a new flavor of Sorcerer, and especially if you want a sorcerer with Wizard divination spells!

Can Paladins Use Cantrips in 5e? | Paladin Cantrips 5E Guide