Dungeons and Dragon’s 5th edition changed combat to be a little bit more simplistic, for good reason. Without having to worry about a bunch of random boosts to attacks, GMs and players were able to more easily play the game. One rule that was deprioritized from the earlier renditions of D&D was flanking: a rule which gave a small attack boost to two characters on either side of an opponent. This was an essential aspect of the gameplay of Rogues and melee classes during 3rd, 3.5, and 4th edition. Things have changed with flanking 5E, however.

In 5th edition, Flanking does make a return to form. Alongside diagonals and character facing, Flanking was included as an optional rule in the Gamemaster’s Guide. These sets of rules exist to spice combat up for people who want tactical options. However, Flanking’s bonus is much larger than it has ever been, making it a controversially powerful rule. Let’s take a deep-dive into our Flanking 5E Guide so you can prepare for it when it’s included.

Flanking 5E: By the Book

To start, let’s talk about the situations where flanking is possible and what flanking does. The first sentence about flanking already gives a lot of essential info:

If you regularly use miniatures, flanking gives combatants a simple way to gain advantage on attack rolls against a common enemy.

First off, flanking is miniature-only. Theater of the mind is not quite restricted enough for flanking to be realistic, since anyone can say “I enter flanking” without actually noting their position with an enemy. This isn’t a problem for most campaigns, since anything suffices for tokens on maps – you just need some way to track position.

Slightly more importantly, this is a way for you to get advantage. For a lot of classes, there’s no easy way to get this on an enemy, without an allied spellcaster. Now the Fighter or Monk can get a resourceless option to roll their dice twice. Do remember that getting advantage on a target twice does nothing; either flank or do something else, not both.

The rest of the paragraph goes over edge cases;

A creature can’t flank an enemy that it can’t see. A creature also can’t flank while it is incapacitated. A Large or larger creature is flanking as long as at least one square or hex of its space qualifies for flanking.

Basically, you need to be somewhat threatening in order to flank. Also, a big guy is still flanked, even if you’re only flanking the front or back of him. Easy enough.

Now, let’s talk about the nitty-gritty; what does it mean to flank? The DMG offers two ways to gain the flanking status, with the two main map types people use:

Be on the opposite sides of an enemy. For medium and small enemies, this is easy enough. Larger enemies are a bit more complicated, since there are more positions you can possibly flank on. Just remember; opposite sides of the square count, and opposite corners count.

Note here that this only gives bonuses on melee attack rolls. This will be important to note later, since this optional rule is rather vague if you just go by the DMG.

For those of you who prefer hex maps…

This is significantly more complicated since it requires counting. You actually count in the direction of the side that benefits you the most. Though, this usually means the side that has more hexes between you and an ally. As long as there are that number of hexes – adjacent to the enemy and between you and the ally – you’re flanking. The numbers are somewhat annoying to remember, but over time it’ll become easy to see. 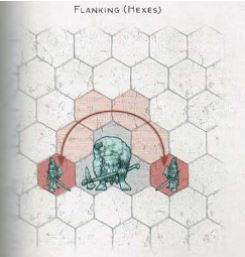 Think of “flanking” as a bonus that affects the allies opposite from one another. If a third person moves into melee against a flanked monster, but isn’t opposite from someone else, they aren’t flanking. However, if you are fighting a Large monster (on a square map), and one person is on the left side, and two people are on the right side, then all three characters would be flanking. On a hex map, this scenario can be replicated if the third character is adjacent to the second one, but you count the hexes in the other direction. You can still count 4 hexes between a player and a third ally, if you place yourself correctly.

These benefits apply to melee attack rolls, as specified in the “Flanking on Squares” section. This applies to hexes as well, but that doesn’t mean that spells don’t count. As long as a spell has a melee attack roll, then it benefits from advantage. That means attacks like Vampiric Touch and Inflict Wounds can benefit from Flanking, and rolling twice on those can be quite useful. However, ranged spell attacks like Firebolt or Disintegrate would not. That also goes for weapons; ranged weapons, like a bow, can never benefit from flanking.

You do not need a melee weapon equipped to grant advantage to an ally; Your presence is all that is needed to distract the monster. That means that an ally can get flanking from a wizard who is unarmed and getting harassed by a goblin, if the ally is opposite of the wizard.

Flanking is an incredibly dangerous strategy in a lot of situations. Because of the particular placement of character tokens, a player can put themselves really far into enemy lines, just to get advantage. As a player, think about how far you want to go to get flanking, since enemies can also get flanking on you! Or you could put yourself out of reach of your allied healer, if you take a lot of damage. Flanking is tactical, remember, so make sure you plan out turns with your allies.

Something that the rulebook is vague about is invisible creatures and flanking. For example, if an ally is behind enemy lines, completely invisible, but you’re “flanking” with them, do you benefit? This is GM discretion, since the enemy can’t technically be distracted by the invisible ally, but it doesn’t break any written rules. Talk with your GM, since that can change plans around effects that turn you invisible briefly.

However, there are definite ways to get flanking that don’t require sacrificing allies or rule finageling. As long as a creature is considered an ally, and considers the party to be an ally, they qualify for flanking. Because of this, summoning spells can make absolutely fantastic use of flanking. Creatures that are behind enemy lines are expendable, so sending them back to give the Fighter advantage is worthwhile. Or, if you encircle a creature with summons, they can all grant each other advantage and dish out big damage.

You can avoid putting actual party members in danger with some crowd control effects. Spells like Lightning Lure can pull an enemy into a dangerous place, allowing for easier flanking. The Battlemaster has some pushing and pulling maneuvers that can be used to move enemies into a better position. Think about the tools at your allies disposal, and you’ll potentially find great, safe ways to get into flanking.

If your GM is allowing flanking, please consider making at least 2 characters in your party that can take damage in the frontline. Soaking attention from enemies is important when they can get advantage… And you want to make sure you have at least two people so you can get flanking yourself!

Why is Flanking Controversial?

There are two reasons that flanking is unpopular: the Conga Line, and Advantage’s rarity. We discuss both of these below.

The Conga Line refers to a scenario where two PCs flank a monster. One of the Monster’s allies then comes to flank one of the PCs. Then another PC flanks that monster, and so on. This leads to a rather comical portrayal of combat, where there is just a line of creatures stabbing each other in the back. It happened often in the earlier editions of the game.

This is avoidable; just don’t take part in the Conga line. For GMs, monsters may not be intelligent enough to make use of flanking. Or, a monster might decide that the positioning just isn’t worth the danger and stay back. For the PCs, you might want to consider the positioning issue as well. You also don’t know if the enemies might have reinforcements or a hidden spellcaster; staying near your allies might be good for you.

Advantage is a difficult commodity for a lot of creatures to get. There are only some effects that give you advantage to attack rolls, and those either aren’t permanent or have a massive downside – Reckless Attack for barbarians, for example. Flanking is a much easier way to get advantage than spells or class features without the downsides.

This is flawed logic, because there are downsides to flanking; You risk being flanked yourself, putting yourself in a position that an enemy wants you to be in, and distancing yourself from allies.

As a GM, you have a lot of power to introduce rules like Flanking. By doing so, you accept a lot of responsibility for the consequences of said rules. This is a really interesting rule that shakes up how combats end up looking like, but also gives a really strong boost to attack rolls.

We would say try flanking, but potentially use rules of your own. Maybe summoned creatures don’t count for flanking. Maybe use this rule with the “Facing” optional rule, and only the creature “behind” the flanked character gets advantage. This rule has upsides and downsides, but right now, it is undoubtedly an incredibly powerful way to get advantage, and should be used with caution.