There are many creatures who prey on the innocent in Dungeons & Dragons 5E. Goblins are by far the sneakiest creature in early game D&D, and they have a lineage of similarly sneaky brethren. At the middle of the hierarchy, the Bugbear might be the least memorable variant of the Goblin military. And yet, they are probably the coolest in concept. If you wish to be the laziest Goblin in the land, our Bugbear 5e guide will help you decide what works best.

Bugbears were introduced in Volo’s Guide to Monsters, and they landed with a faceplant and a yawn. They are the middle troops of the Goblin military and are by far the hairiest members to boot. During wartime, you will never find a more bloodthirsty member of the Goblin forces; Bugbears are well-known to be the ones committing the most atrocious crimes of Goblin warfare, barely held back by their reluctant Hobgoblin leaders. 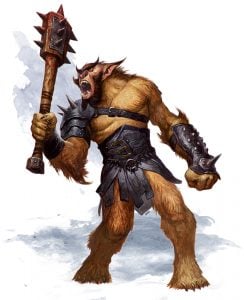 However, sneak up on a Bugbear enjoying time by itself, and you’ll uncover a different beast. Outside of battle, a Bugbear spends most of its time eating and sleeping, or intimidating Goblins to do their dirty work. This does not mean that a Bugbear cannot do the work, far from it; they simply have full faith that their energy is better expended on murder and battle.

When a Bugbear is not in the Goblin army, they are traveling in gangs. The Bugbear population is fairly small, so these gangs usually value each other, but only as long as it can supply consistent food, water, and treasure. As soon as the gang is in danger of dissolving, the bugbears scatter, more than happy to fend for themselves if it means a chance at survival.

These horrifying warriors do have a religious side. Hruggek is the Bugbear’s might, and Grankhul is the Bugbear’s cunning. Their worship amounts to little more than dedicated battles to them, and praying for mercy in the afterlife. That’s because the Goblin pantheon is in tatters, and the Bugbear cares little for dying gods. What they do have is much fear for the gods that shredded the Goblin pantheon. They will do much for a god or goddess that proves themselves worthy of fear.

Bugbear names are simple, but important; a Bugbear needs to know what to respond to, so it can stop napping and start fighting. Check out our Bugbear naming guide if you need help there!

Bugbears only have one race attribute section, and boy is it unique! All bugbears (without DM intervention) have the following racial traits.

Bugbears are heavily weighted towards using weapons, but their Surprise Attack works with any attack roll. We suggest classes that can be Melee, at least; Long-Limbed is so much fun!

If your plan is to go for a melee brawler, then the Bugbear is a very unique build path to work towards. There’s a reason to play Bugbear for nearly any Strength build, and you can even risk it for some Dexterity builds. Try it out, if your party has a few frontliners, or even need a scout of some kind.

How Long is a Short Rest in 5E? (ANSWERED)