Out of all of the classes in Dungeons & Dragons 5E, the Artificer may be the only one not desperate for magical items. Thanks to their inherent ability to make magic items, you may think that the Artificer should just hand everything over to their allies. While the Artificer is quite good at making their own toolkit, this doesn’t mean they should be shafted out of all magical items! This guide will tell you what are the Best D&D 5E Artificer items in the game!

The Artificer serves two major roles in the party; it deals damage, and it supports. Some Artificers, like the Battle Smith, support by tanking. Others, like the Alchemist, support by healing. So, the Artificer relies on magic and armor alike to best aid their allies in any given situation. Because of that, please consider the following magic items when searching for a new Attunement slot.

While most Artificers are tanky, all Artificers are going to want a bit of Anti-Magic. If you fear for your brain and body, a Mantle of Spell Resistance is a great step in the right direction! If you already resist magic, consider a Cloak of Protection instead. Alternatively, a Ring of Spell Turning is a high-level version of the Mantle with an incredibly strong reflection effect.

If your Artificer has a shield slot, this shield is crazy for them! You get advantage on all initiative rolls, which means you can be the first into the fight more often. Considering Dexterity isn’t the most important stat for the Artificer, this will help cover for your weakness quite well. The shield also gives you advantage on Perception; not the Artificer’s best quality, but still another chance to crit. If you’d prefer not to wear a shield, a Weapon of Warning might be better for you.

Wand of the War Mage

For an Artillerist, you’re going to want to buff your spell attack rolls. And the other archetypes gain some advantage from the bonus to spell attack rolls as well; Alchemist has a few ranged spell attacks and the Battle Smith’s Steel Defender uses your spell attack roll for attacks. Once you gain Magic Item Savant, the Staff of the Magi will let you melee attack and get boosts to your spell rolls. At that point, the Robe of the Archmagi is also worth checking out… Though, your Wizard or Sorcerer might deserve that more. 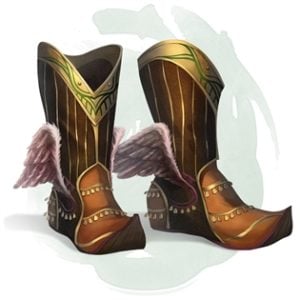 Almost all classes want an alternative way to fly, in case magic is out-of-reach. The Winged Boots are absolutely top-tier when it comes to flying around. Most Artificers want this mobility so they can avoid bad situations. This is less important for Battle Smiths and Armorers, but still a nice grab.

Cape of the Mountebank

Having a get-out-of-dodge option is quite nice, and you don’t even need to attune to this one! Just a cast of Dimensional Door, which is good for a medium armor class with very limited mobility options.

This little cube is exceptional at keeping yourself, and your team, safe. You press a side and suddenly specific effects – nonliving matter, living matter, etc – cannot enter the cube. You have so much power over this thing, and it can keep very dangerous things out of your way for up to 7 rounds a day. This can be all you need to think of a plan!

A bag of holding might be tempting, but this haversack is simple and easier to organize. It’s also much rarer; feel free to use a Bag of Holding until you can get your own personal Haversack to store your materials in. This thing uses pockets to more easily divide your inventory into what you need, and it’s lighter to use in general.

Helpful to make a golem army, should that be part of your heart’s desire! As an Artificer, it would totally make sense for you to start that up.

This little rock can store up to 3 levels of magic. For most mages, that’s not too important… But for you, that’s almost half the level of spells you can cast. So, now your Barbarian or Fighter can cast Haste or Fly for you, freeing up your actions to do other things. Of course, this requires good teamwork, but the Artificer is a team-based class.

Getting 5 extra levels of spells is a big deal for a class used to only having 5 levels of spells! That’s a lot of extra spell slots that you can use to problem solve, buff the party, or deal extra damage!

As the party crafter, having a pocket full of useful items will come in handy. Your party might laugh at you now, but they’ll be begging for your 50 feet of hempen rope at some point in your adventures!

You’re a crafter, a creator. You need glue sometimes! This can also be extremely useful for keeping things nice and safe when you start creating bases of operation.

This… Might go to you first? If you don’t have a Wizard in your party, you use Intelligence for most of the rolls that you make. So… Get that 22 Intelligence!

The Artificer is in a weird spot with magical items. Thanks to Infusions, you are actually in control of your magical item pool! The best thing you can do is look for magic items that you can’t replicate and make sure that you’re collecting those. For instance, most of your Infusions don’t get you extra spell slots, so a Ring of Spell Storing comes in quite handy!

Hopefully, this list helped you think of what to buy the next time you head into town, or split loot with your party.